Bangers and mash gets its name because sausages used to burst or ‘bang’ while cooking, due to the addition of rusk, a dried bread, being added to the meat. For the uninitiated, Bangers & Mash with Guinness Gravy is the familiar term for sausage and mash, a favorite British and Irish dish typically served with a heavy and rich onion gravy. Past the quirky name, classic Bangers & Mash with Guinness Gravy is typical pub grub in Britain and Ireland but becomes a perennial favorite in the States and Canada nearer to Saint Patrick’s Day. I remember eating a version of bangers and mash as a child (and not liking it very much) at my Grandmother DeRemer’s house.

Turns out, I am Irish…no really. I swear.

I vaguely remember my Grandmother telling me the story while we ate of her grandmother who was from Ireland. Too little to absorb much of any of what was being said, (focused mainly on the ONLY part of the meal I liked, the mashed potatoes) I recall only Gram saying that she used to refer to everybody from their milkman to the neighbor’s cat as ‘McGillicutty.’ It was not until about a year ago that I realized McGillicutty is a filler word you use when you just can’t think of a person’s name. 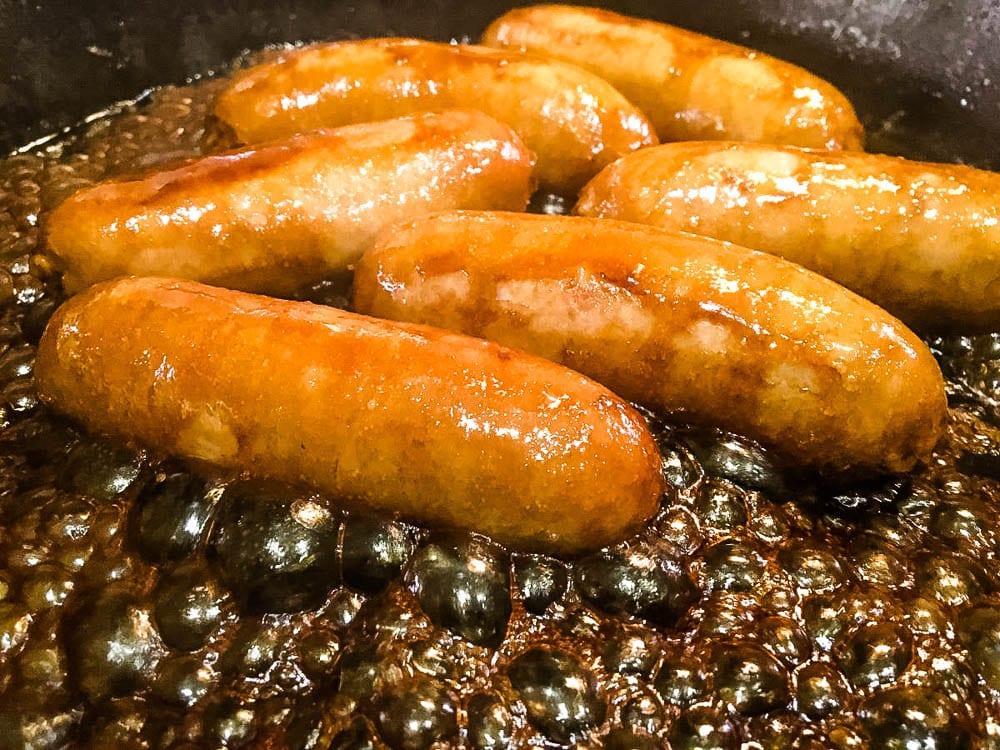 Among the best helpings of bangers and mash I’ve eaten (it slowly grew on me) were in Canada, specifically Montreal where nearly 49% of the population is Irish. Getting caught in Montreal on Saint Patrick’s Day is likely the best time you’ll ever have. Anyway, we are Irish, and according the DNA test I did recently, WAY MORE than I even knew. Neither Canada nor McGillicutty have anything to do with this recipe, but then I digress…. Also known as sausage and mash, this dish consists of one of any number of flavored sausages made of pork, lamb, or beef. Recipes for sausage and mash invariably recommend the best “butcher’s sausage” you can afford. As a general rule of thumb go pork and keep it traditional. If you can find some great butcher-made pork sausage, it’ll perfect for this dish. If you prefer something other than pork, use any sausage you like. I have seen recipes where even Brats were specified, but to me, that’s not in keeping with tradition. Yes, it goes back to the ‘McGillicutty thing’ and that I am Irish and didn’t know it, but I prefer a tasty, relatively straightforward pork sausage, on a scale from a zippy Cumberland link to say a sage-spiked Lincolnshire variety. Yep, I am a sausage geek. Pork sausage is the traditional sausage in Bangers & Mash with Guinness Gravy.

On a recent trip to Trader Joe’s, I found a package of sausages labeled Irish Bangers, and even listed rusk as an ingredient on the front of the package. PERFECT and in keeping with tradition. But, here is where I must interject a smidge of history so you understand why…during the early 20th century thanks to two World Wars, meat was scarce in much of the UK and pork sausages were bulked with grains, extra liquid, and crushed biscuit to help stretch the meat reserves. When cooked, these shifty embellished sausages had the propensity to explode out of their casings and the term “banger” was born. Well, supposedly. 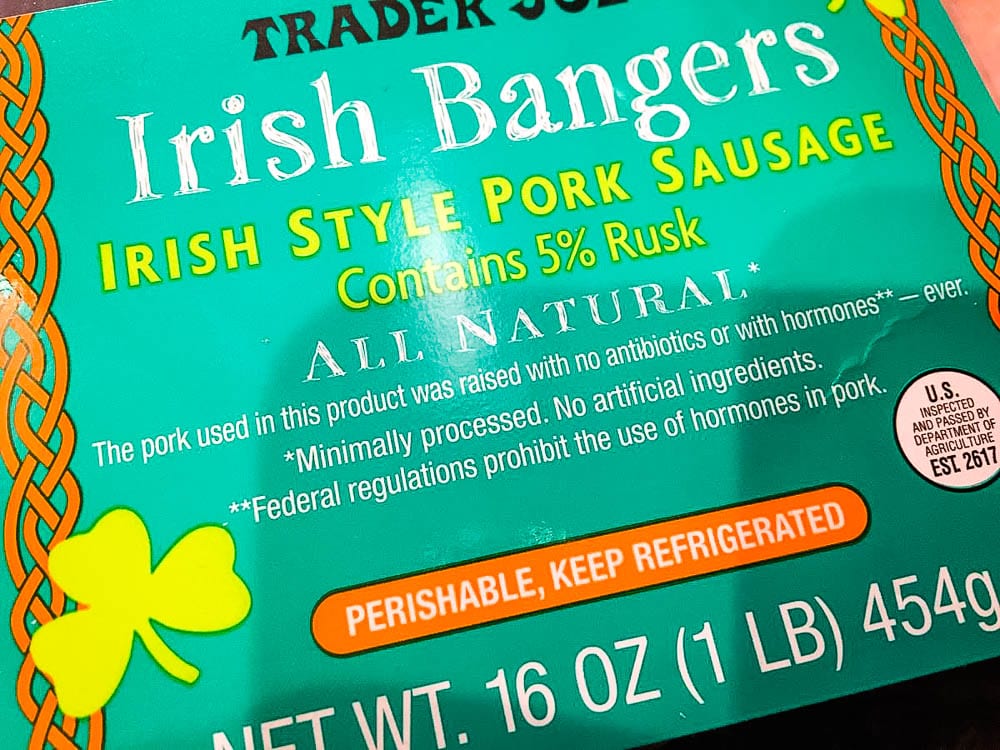 Again I ask, who is McGillicutty??

And rusk? Well, it turns out rusk is the crumbled remains of an English biscuit, an egg-less bread of sorts that is hyper dense and flat. It was the most widely used filler that went into these little guys because it was available. Simply put, to me, bangers must have filler, or they simply aren’t bangers. Simply put, bangers must have filler, or they simply aren’t bangers.

A note herein regarding the method and the beer…essentially, you will be poaching these sausages in beer. The beer will evaporate and the sugars will caramelize. Along with the juices from the sausage, you will be left with a thick and dark and wildly flavorful syrup coating the sausage. You want this. And no, they are not burned, they’re exactly as they should be. The caveat? I specify Guinness for this recipe. It’s true ONLY for the gravy. When it comes to the poaching liquid, I give you wiggle room. I use Guinness. Use what you drink and love because the poaching liquid becomes the flavor profile. Lite beer isn’t going to cut it. You will need an ale, a lager or a stout, anything that contains fermentation sugars so the science will work properly, but not lite beer.

For the Mashed Potatoes

For the Stout Onion Gravy

Heat oil in a skillet over medium high heat. Add sausages and stout. Cover with lid and crack just to allow enough steam to escape. Cook covered for about 10 minutes, turning halfway through. After they’ve cooked for 10 minutes, remove lid and allow the liquid to reduce a bit and coat the sausages. When the liquid is almost gone, lower heat to medium low and continue cooking with the lid on, rotating occasionally, until evenly browned and cooked through, about another 10 minutes.

In a separate pot, heat butter over medium heat. Add sliced onions and cook until slightly brown and fragrant, about 10 minutes. Add the fresh Thyme leaves and stir 1 minute until aromatic. Sprinkle with flour and allow to cook 2 to 3 minutes more. Add stout and scrape bottom of pan vigorously to deglaze. Add beef broth and allow to simmer until no longer foamy, about 15 minutes.

In large pot cover potatoes with water and bring to a boil. Cook until soft. Drain and add butter and buttermilk. Mash to your preferred consistency.

Top a heap of potatoes with sausage and then gravy. Charleston, South Carolina based culinary novice, ardent authority on all things travel, designer by trade, and creator of Not Entirely Average.