Oven roasting the squash deepens the flavor more than any other method I’ve tried.

Oven Roasted Spaghetti Squash With Sherry And Cream is a top request since the post Browned Butter Seared Scallops published. I have been asked repeatedly about what I served the scallops over in the photos, so I am delivering this crude but best I've found method for your experimentation. After it became clear folks are looking for alternatives to mashed potatoes (you guys said it, not me!), I decided to share this method for roasting spaghetti squash on Not Entirely Average. What I do with the squash after it’s roasted varies depending on what I plan to serve it with. I would be remiss if I did not state that spaghetti squash is great by itself. That is, roasted in the oven, and served with just a bit of really good and flavorful olive oil, salt and pepper.

Most all types of winter squash are nutritious, starchy vegetables that offer fantastic fiber, beta-carotene, and folate to name a few. I try to cook and bake (yes, bake!) with winter squash year round. Spaghetti squash happens to be one of those fun ones which offers the crazy spaghetti-like texture and lends itself really well to whatever you add to it.

I try to cook and bake (yes, bake!) with winter squash year round.

I first tasted it creamed at a long since closed Italian restaurant called Nona's back in Jersey. Chef Cal explained to me how he prepped it. One three-pound squash will make enough “noodles” to equal around a pound of pasta noodles, so for him, this exquisite side made a ton of sense cost-wise. Fast forward to now, and Oven Roasted Spaghetti Squash With Sherry And Cream is a modified version of Chef Cal's. Pictured here over a bed of Oven Roasted Spaghetti Squash With Sherry And Cream are Browned Butter Seared Scallops finished with a light drizzle of A Sweet, Sticky, Spicy Bourbon Glaze to keep things interesting... 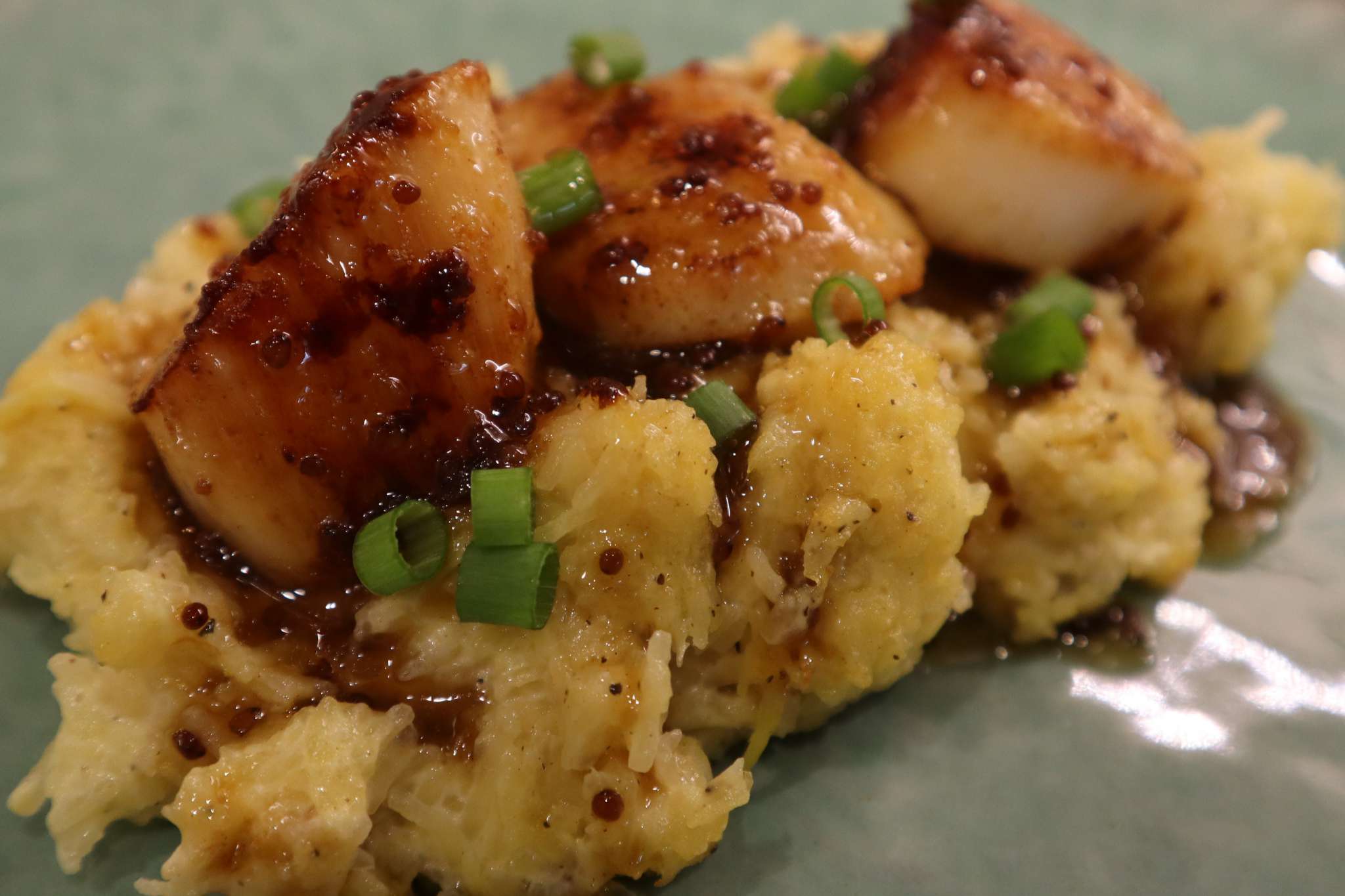 I have found oven roasting the squash reduces the amount of moisture and yields a mild and buttery flavor, and almost caramelized edges that add a nuttiness that cries out for simpler ways to dress it.

Once cooked, the buttery flesh of the spaghetti squash can be separated into spaghetti-like strands by simply scraping it with the tines of a fork . I prefer a hands-off method of roasting spaghetti squash in the oven. Oven roasting the squash deepens the flavor more than any other method I’ve tried. I’ve seen and tried baked or microwaved whole, steamed upside-down in a pan of water in the oven (my Mom’s way), sliced into rings and baked, and halved lengthwise or crosswise and baked cut-side up or down. All of those methods work, but I have found my preferred method reduces the amount of moisture in the squash and yields a mild and buttery flavor, and almost caramelized edges that add a nuttiness that cries out for simple ways to dress it. 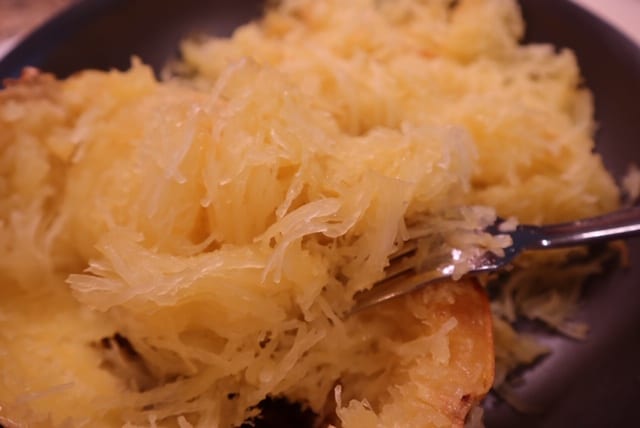 Using the best knife you have (which means the knife you are most skilled at using, given these are difficult to cut), cut the spaghetti squash in half from the stem end to the base. Rub the inside lightly with olive oil, about one tablespoon per half, and sprinkle with a good couple pinches of salt. Roast it cut-side down on a heavy baking sheet lined with parchment. This way, the moisture pools on the pan instead of collecting inside the spaghetti squash. The skin will brown a great deal. It may even appear to burn slightly. Do not worry and do not cover – the browning means the end result won’t be mush. 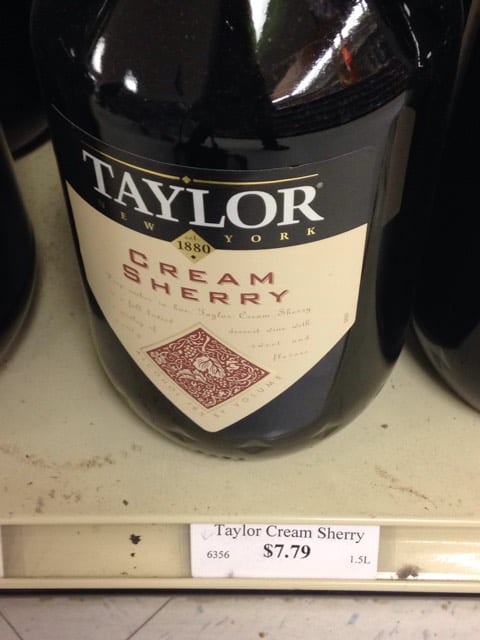 I would be remiss if I did not state that spaghetti squash is great by itself. That is, roasted in the oven, and served with just a bit of really good and flavorful olive oil, salt and pepper. Done. I've listed the steps for roasting below. To prepare as I have in the recipe Browned Butter Seared Scallops recipe, little else is required but some light cream and crème sherry. Never cooked with or purchased a bottle of sherry before? There are many different varieties of sherry. I stick with what I know and get positive results consistently.

I would be remiss if I did not state that spaghetti squash is great by itself. That is, roasted in the oven, and served with just a bit of olive oil, salt and pepper.

That said, my purchase of sherry, port, Marsala, etc., are ONLY kept in the house for cooking, and a bottle will typically last me 6 months or more. The Taylor's brand may be purchased relatively reasonably, and is perfect for having on hand to cook with without breaking the bank. You'll have to weed through all of the varieties, but suffice it to say to say, one bottle of crème sherry (versus dry, tawny, etc.) will bridge many recipes, especially if you follow the recipes on this blog. 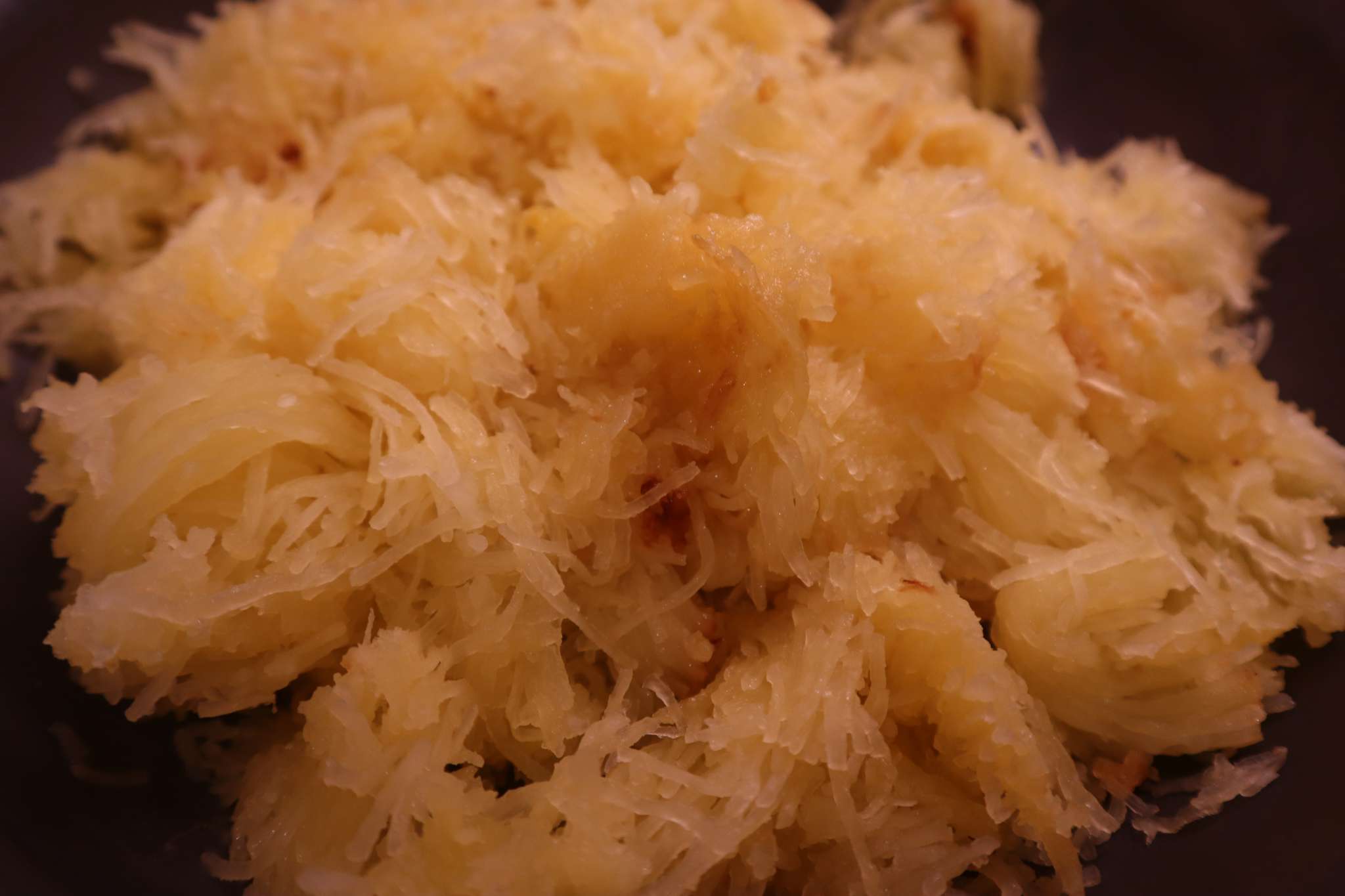 Ingredients for A Roasted Spaghetti Squash

To prepare the spaghetti squash, preheat the oven to 400 degrees Fahrenheit and line a large, rimmed baking sheet with parchment paper for easy clean-up.

Use a very sharp chef’s knife to cut off the tip-top and very bottom ends of the spaghetti squash. Stand the squash upright on a stable surface and carefully slice through it from top to bottom to divide it in half.

Use a large spoon to scoop out the spaghetti squash seeds and discard them. Drizzle the insides of each squash half with 1 teaspoon olive oil and rub it all over the inside, adding more oil if necessary. Sprinkle salt over the interiors of the squash, then place them cut-side down on the prepared baking sheet.

Bake for 40 to 60 minutes. The cut sides will turn golden and the interiors will easily be pierced through with a fork. Small squash will be done sooner than large squash, so keep a close eye. If you see the skins beginning to brown, do not stress. This is supposed to happen and will only enhance the flavor of the flesh.

Once the squash is done baking, fluff the interiors with a fork. 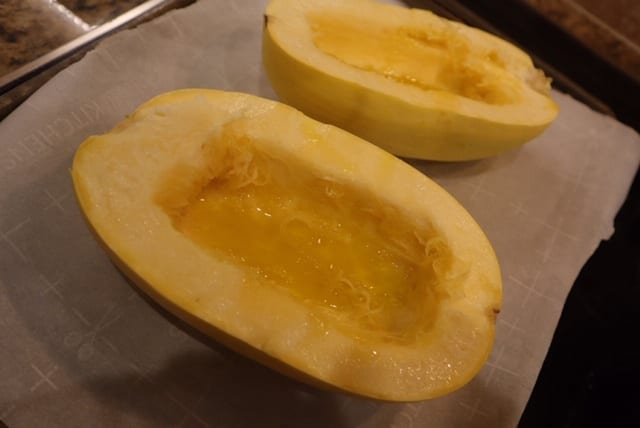 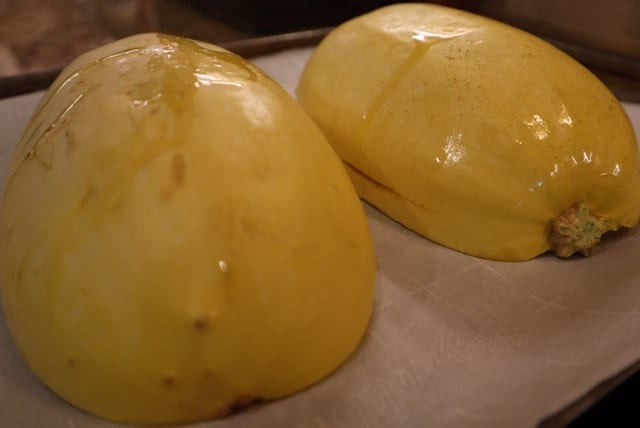 Bake cut side down on parchment 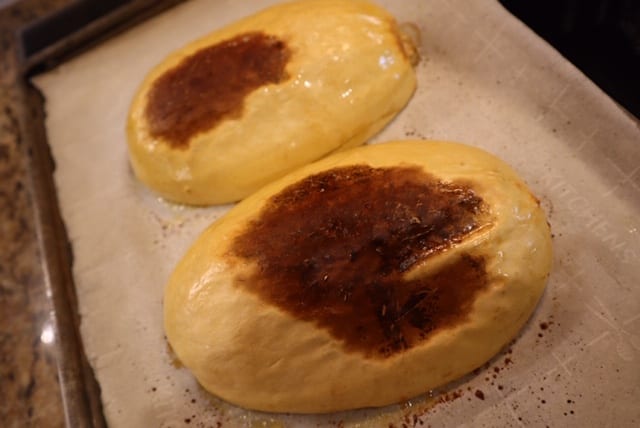 The skins will brown during roasting 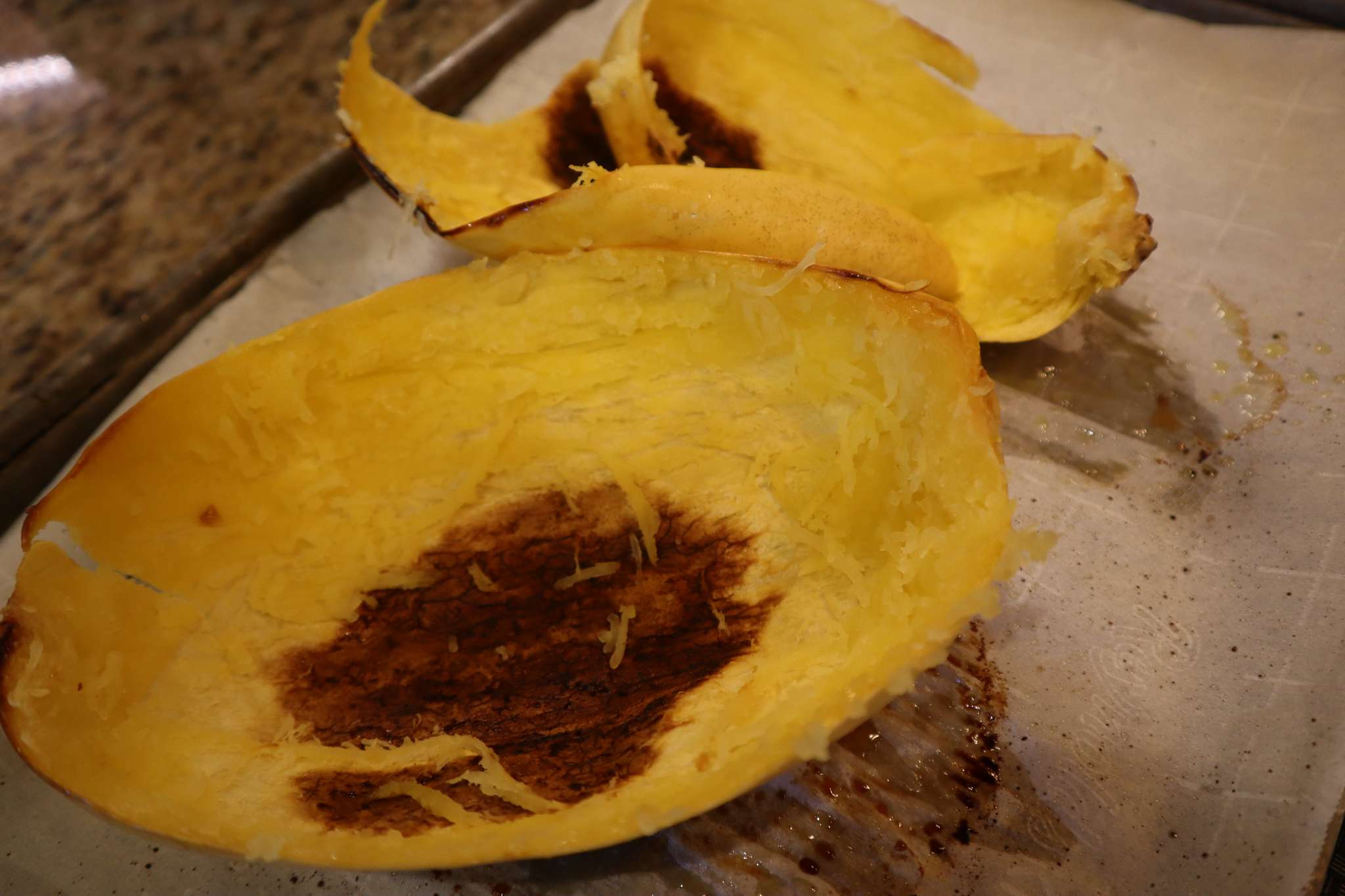 Use the tines of a fork to scrape the flesh

*The quantities measured will largely be determined by the size of the squash you selected. If in doubt, begin with lessor amounts measured and add if necessary.

When the squash is fully cooked and has been removed from its shells and 'fluffed,' cover with foil to keep warm. Set aside.

Add the reserved spaghetti squash. Mix until well incorporated. If too stiff, add additional cream. If too runny allow to cook gently over low heat until thickened. Add salt and freshly cracked pepper to taste.