Baked stuffed pumpkin is a northeast tradition. It's also a dish rarely offered in restaurants, despite being almost as popular as the turkey is to the American Thanksgiving table.

As soon as sugar pumpkins would hit New Jersey farm stands in the fall, I always planned some variation of a baked stuffed pumpkin to serve at dinner, whether it ended up being a sugar pumpkin or another winter squash.  Baked stuffed pumpkin is a northeast tradition. It's also a dish rarely offered in restaurants, despite being almost as popular as the turkey is to the American Thanksgiving table. 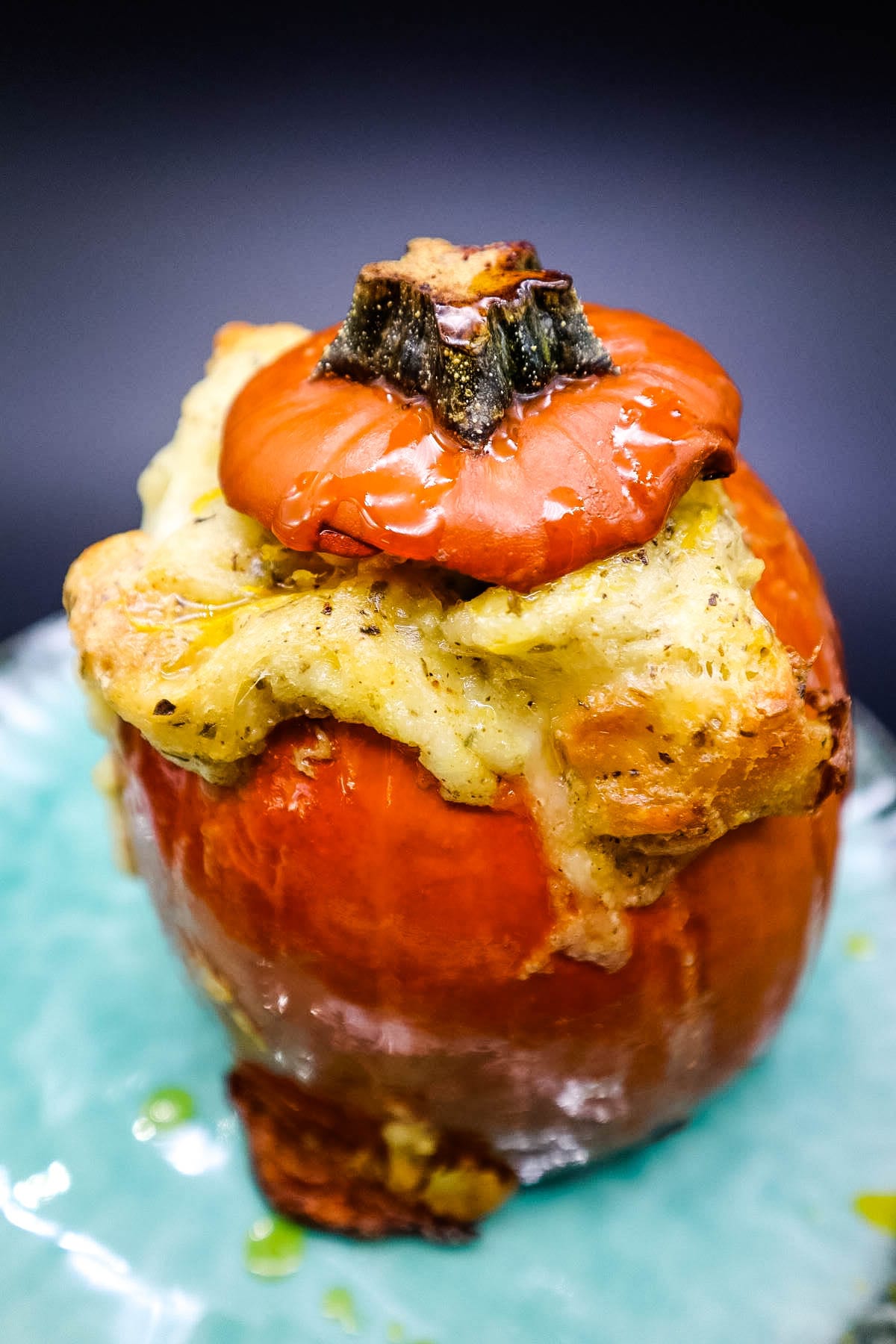 With every mouthful, your eaters will wonder exactly what all is packed into this clever bubbled-over 'icon of Harvest.'

I recall the first time I had seen a baked stuffed pumpkin. It was at a childhood friends’ home around Christmas. I remember asking why anybody would eat a pumpkin. I was maybe 6 or 7 years old, and perhaps thought pumpkins were for Jack-O-Lantern carving only, I don't know. Yet I do remember her explaining that while she and her brother went to Wightman's to select pumpkins just as my brother and I did, they were not allowed to carve them, as her father traditionally cooked their pumpkins after Halloween. I also recall asking my Grandmother about cooking pumpkins. Her answer was quick and matter of fact; during the Depression, nothing was wasted, so even the pumpkins got baked at Thanksgiving and Christmas. I now wish I'd asked my Grandmother what she remembers her mother stuffing them with, as I'd certainly have liked to know that now. 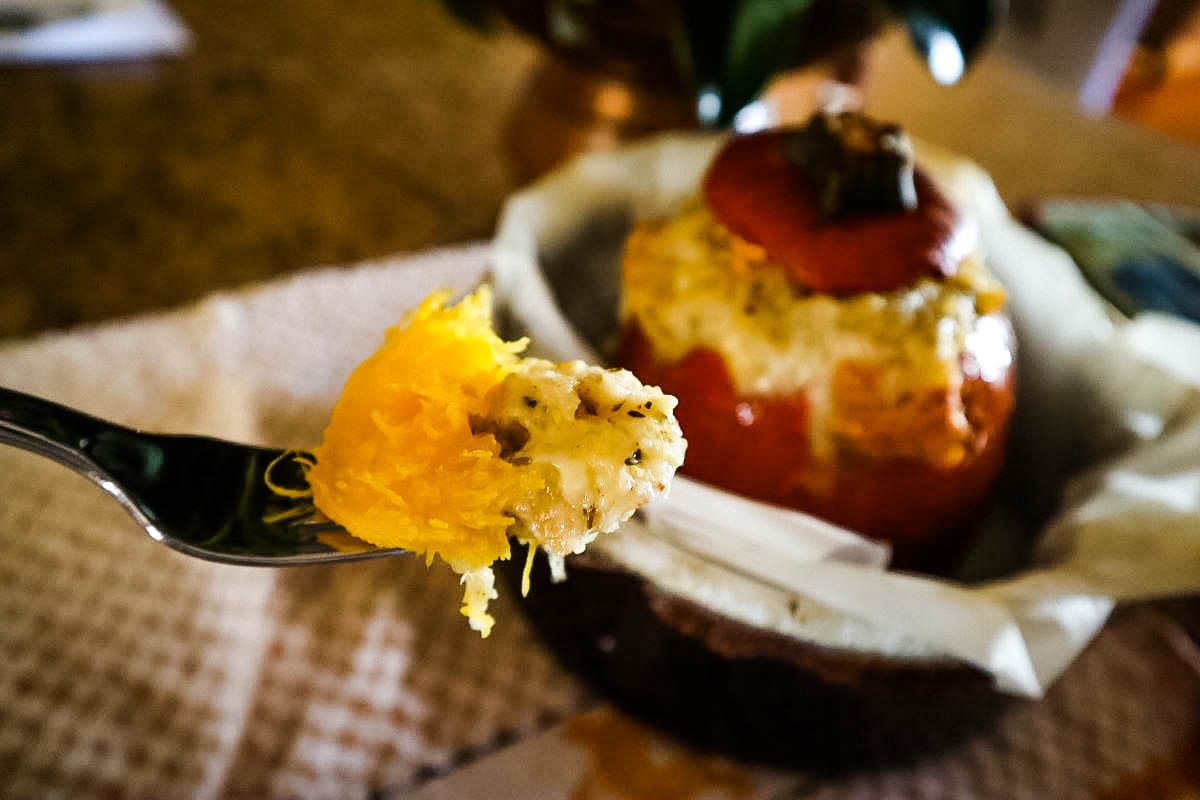 My Aunt Carol and Uncle Bob visited from New Jersey a couple of weeks back. I planned a few pumpkin recipes for the evening they'd be eating at my parents house. This baked stuffed pumpkin recipe was one of them. Aunt Carol wanted a 'taste' of Not Entirely Average, as it's usually my Dad who ends up the official taste tester of many of the recipes. This turned out to be the final method and ingredient 'test' before being able to say I'd achieved what I wanted from this recipe, the finished product as mouthwatering as the aromas coming from the kitchen. It passed muster with Aunt Carol and my Uncle Bob, too. And, IT WAS GORGEOUS! 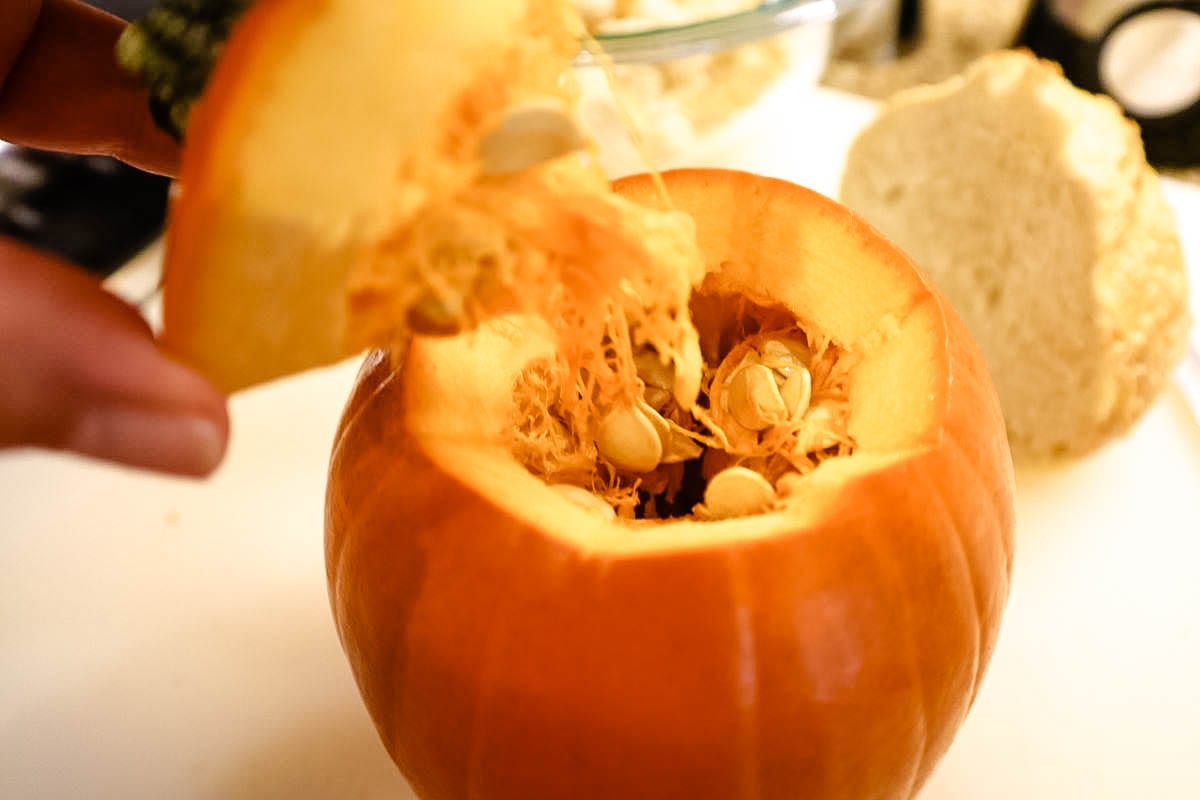 Despite this baked stuffed pumpkin recipe being very easy to make, it does take significant time to bake in order to thoroughly cook the pumpkin, and to bring out the incredible flavor profiles in the final product. There is, by design, a whole lot of sweet and savory going on in this dish. With every mouthful, your eaters will wonder exactly what all is packed into this clever bubbled-over 'icon of Harvest.' The tantalizing smells alone are sure to make everyone hungry.

While I've outlined the ingredients I used in developing my rendition of baked stuffed pumpkin, I have encountered others who prepare this fall treat based on their own unique stuffing ingredients. Bottom line, adjust the ingredients to suit your taste.  For example, at one point, I considered using a smoked cheese such as a cheddar or a Gouda in this dish. I still think it would have offered great depth to the flavor, but never tried it. Experiment! 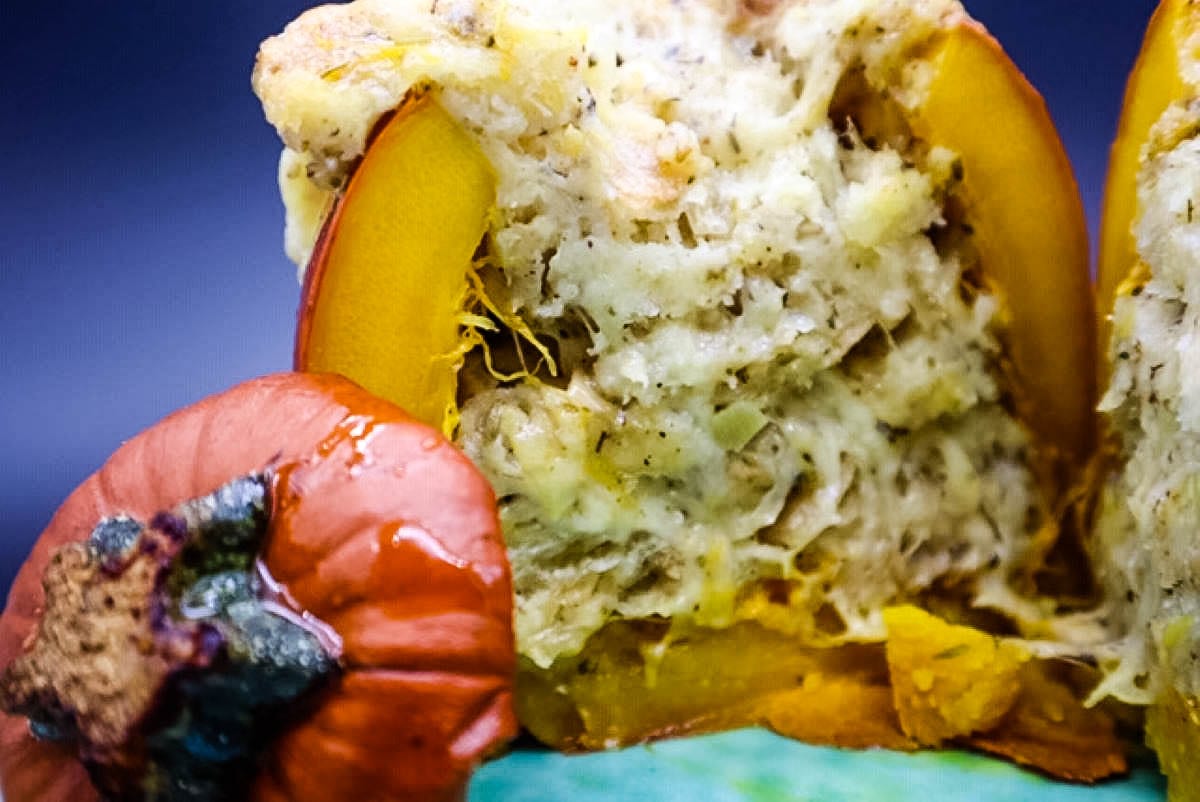 One major tip I can give is to think ahead about what you plan to bake it in. I say this because the pumpkin will begin to collapse under its own weight in the oven after about the first hour of the bake. That is what you want to happen, but you don't want a flattened pumpkin at the end, so baking it in a close-fitting, snug dish is super important. I recommend either a parchment-lined small Dutch oven or a parchment-lined round stoneware casserole.

You want the pumpkin to fit snugly.... 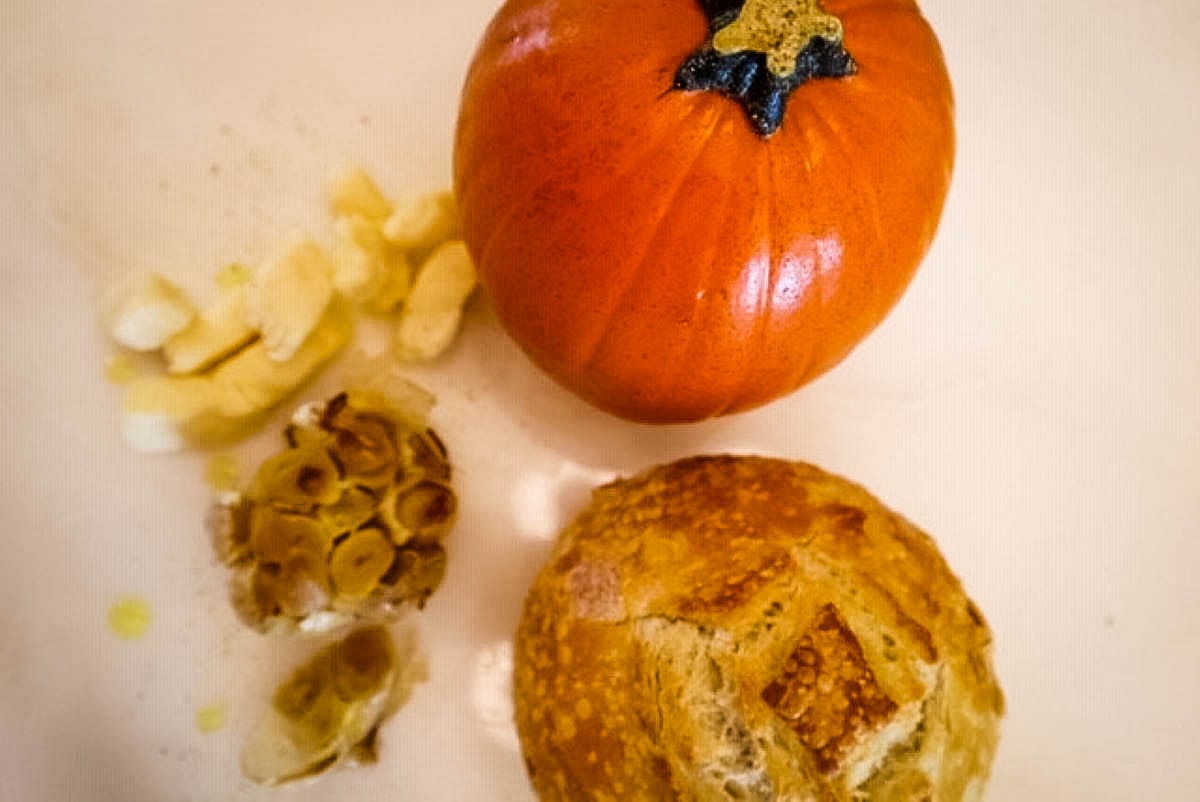 1 sugar pumpkin, approximately 1 to 1 1/4 pounds, 2 if you plan to double this recipe (do not use a larger pumpkin, as bake time will become obscured)

1/2 freshly grated nutmeg seed, plus additional to taste (we are using McCormick)

Salt and pepper to taste

Cut the bulb of garlic in half cross-ways. Place on a sheet of heavy foil and drizzle with 1 tablespoon of the olive oil. Replace the top half and wrap tightly. Roast the garlic for 40 minutes and remove from oven. Once garlic has cooled slightly, pop the roasted cloves from both top and bottom halves into a large bowl. Pour any remaining olive oil from the foil into the bowl as well. 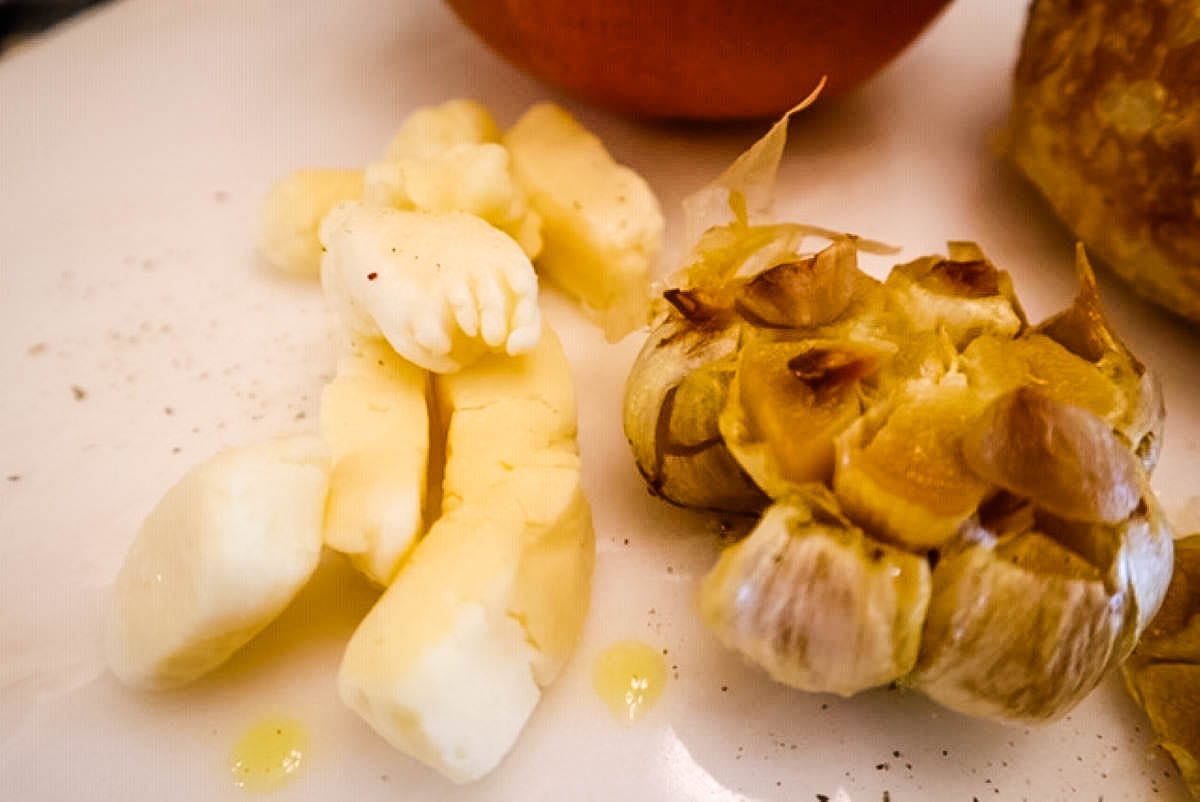 Wash and dry the pumpkin. Using a sharp knife, cut the top off the pumpkin, as though you were making a jack-o-lantern, and scoop out the seeds and fibers. 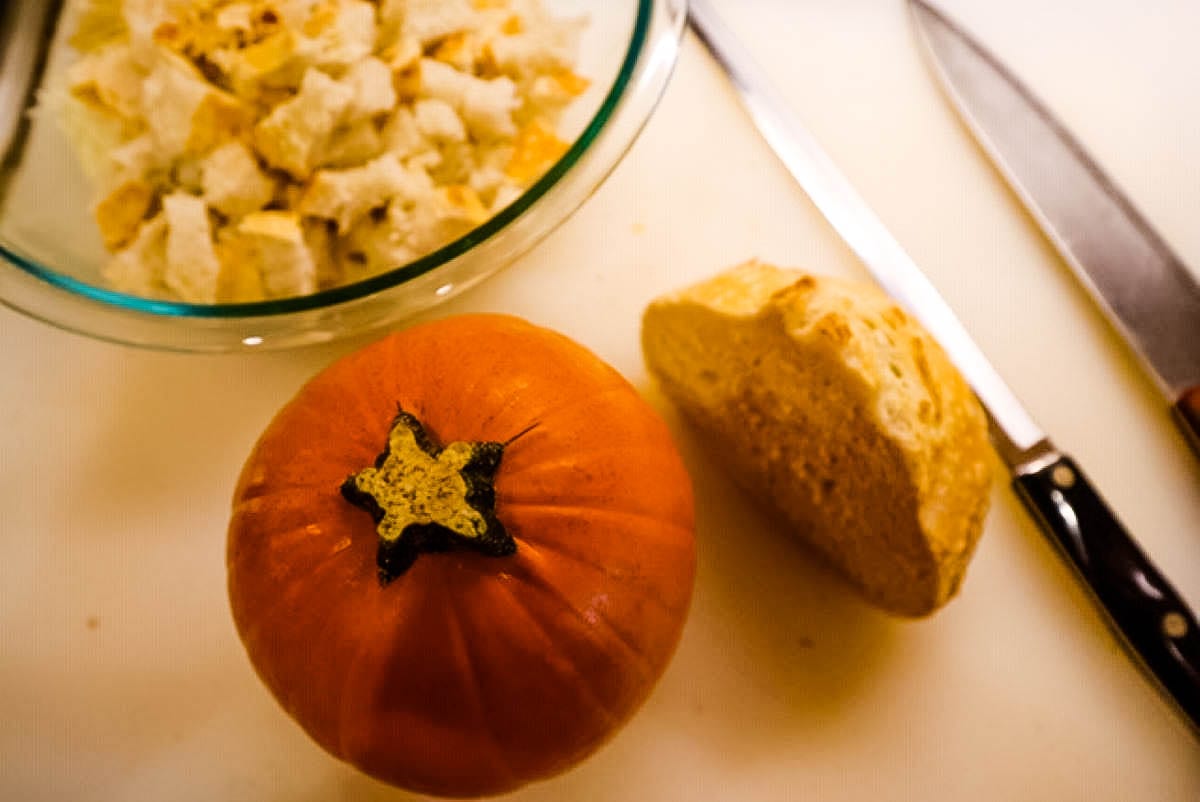 To the roasted garlic cloves and residual garlic oil, add the shredded Gruyere, cheese curds, the sourdough cubes, herbs de Provence, and another grate or two of fresh nutmeg if desired. Using your fingers, work the roasted garlic into the dry ingredients until evenly distributed. 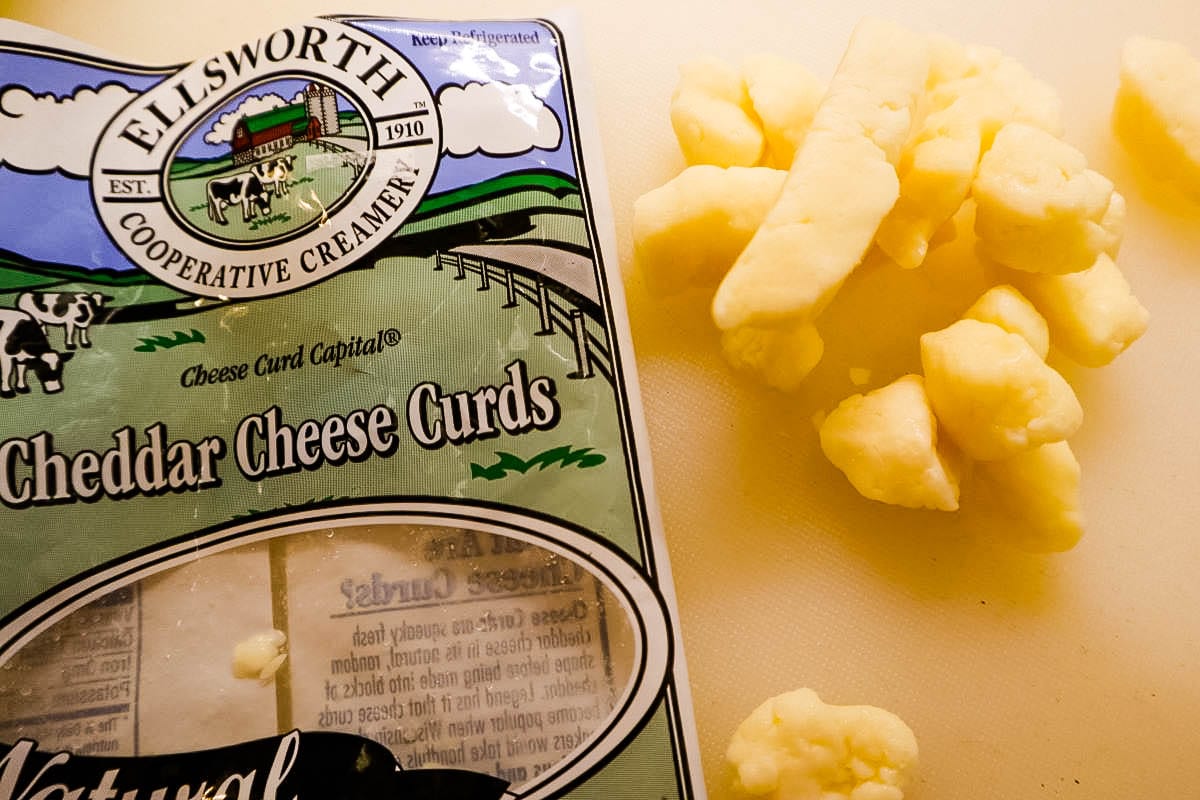 Bake at 350 degrees for two hours. Stuffing will expand within the cavity during the bake, so anticipate the pumpkin top to lift from the pumpkin toward the end of the bake, making for an appetizing bubbled-over edge. Allow the pumpkin to rest on the counter for 10 minutes before carefully transferring to a cutting board. Remove top and cut first in half, then each half into thirds. Serve the baked stuffed pumpkin wedges alongside your traditional Holiday table favorites. 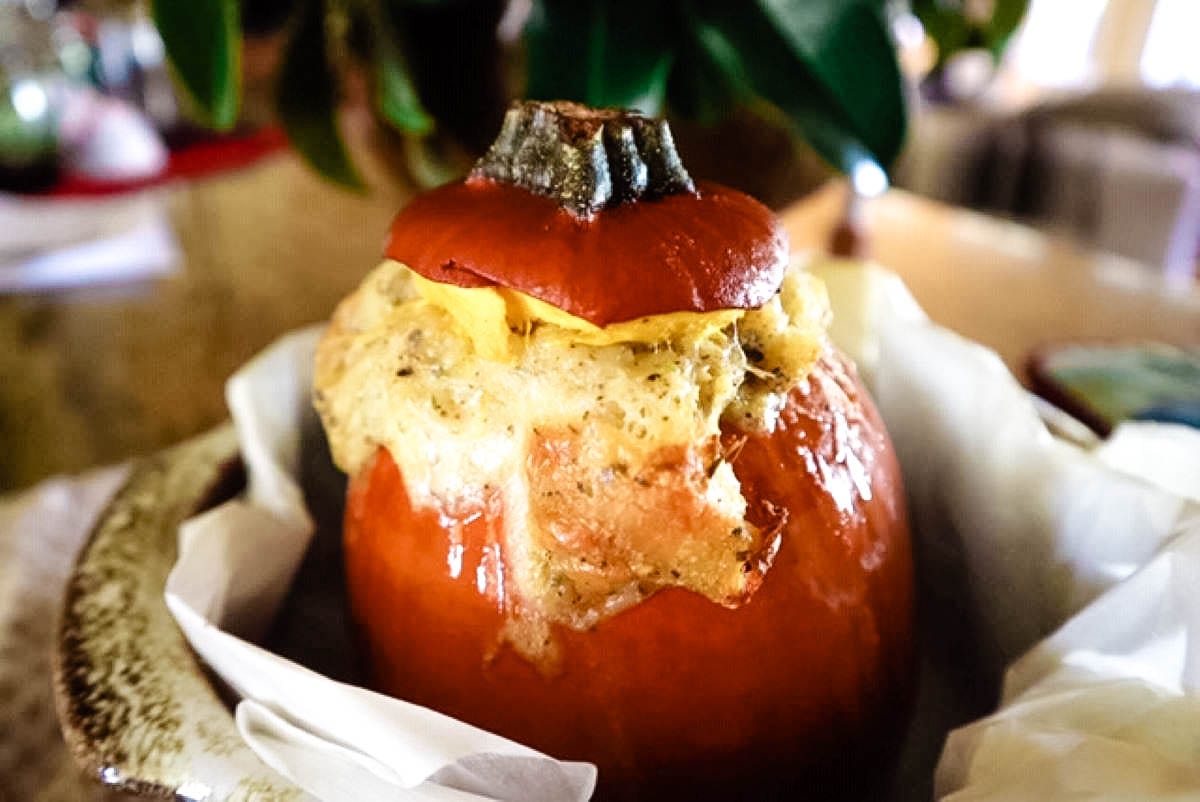