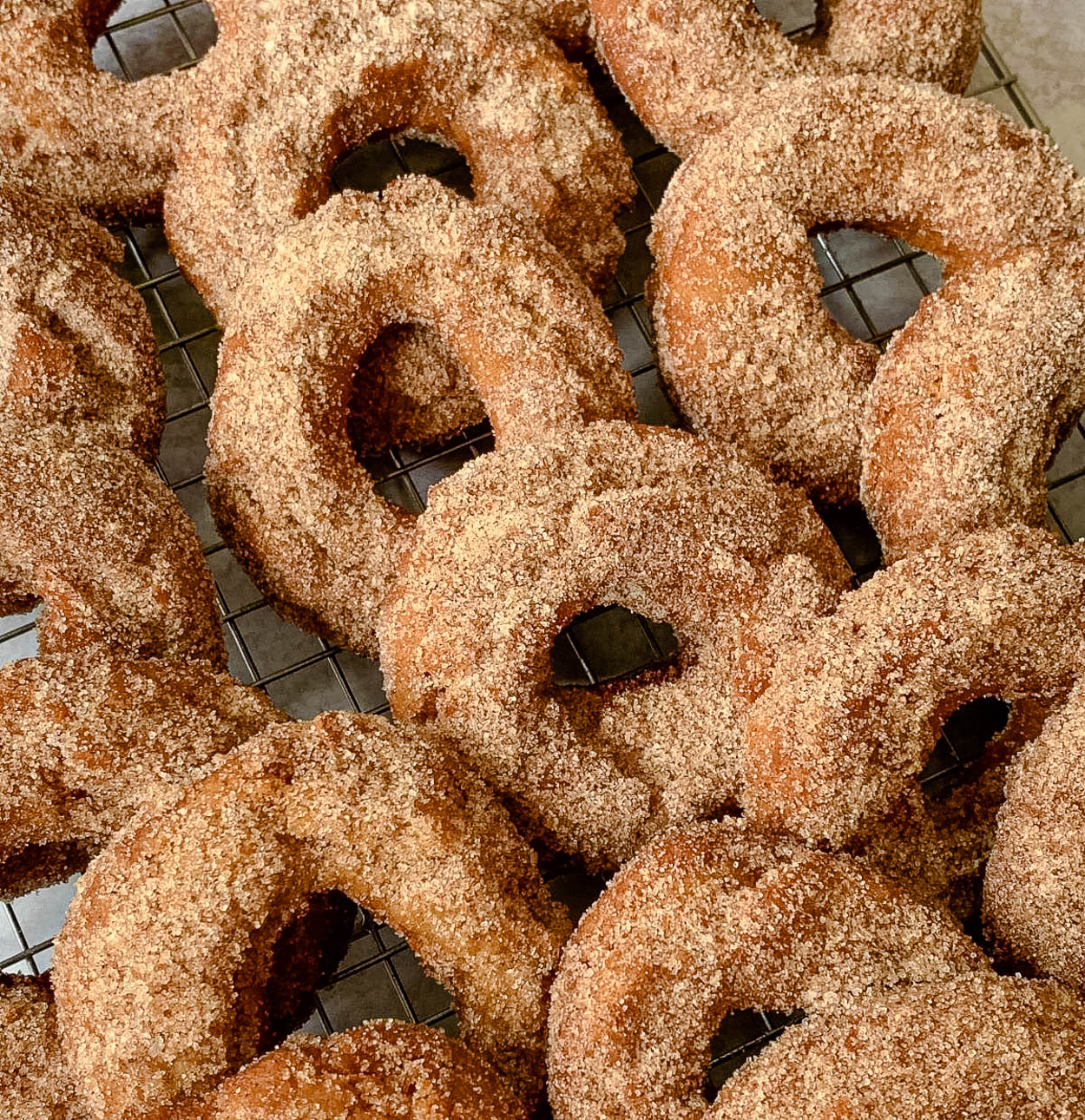 I baked yesterday. Well, fried. When my neighbor asked what “all the good smells” were, I replied cheerfully, “this is what we Yankees do in Fall.“

An old fashioned apple cider donut recipe does not involve fancy donut pans or wild ingredients. In fact, I would place a money wager on each of you having exactly what is required to cook up these autumnal bites of YUM in your pantries at this exact minute. Well, except for the apple cider perhaps. Before I dive in, I know somebody will inevitably ask me, ‘is is donut or doughnut?‘ Doughnut is the original, generally preferred spelling of the word. It is more common in the United States and vastly more common internationally. Donut is an Americanized, shortened version of doughnut that isn’t incorrect, but it is much less common. In this post, I will use doughnut and donut interchangeably.

Hosting a Halloween party? Need a sweet treat to bring into your child’s classroom? This recipe makes BUNCHES AND BUNCHES of donut holes!

Love apple desserts? Peek at my methods for

How about that American classic that can be found at the hot and ready at just about any apple orchard? That’s right, a fresh cider donut.

The apple cider donuts origin is debatable. Contrary to wide speculation, this sweet treat is not necessarily all American, but it does appear to take a firm hold with the arrival of the Colonists. That is because the concept of fried dough is not exclusive to one country or culture. The Colonies of course, are made up of several countries and cultures in the beginning, the Dutch, the French, and the English. During fall harvest, butchered meat yielded much inedible fat. In an effort to use everything, that fat was ultimately rendered down and put to use as fry oil. Given apples were part of the seasons harvest, along with numerous other crops, it makes sense that existing methods for fried dough with ingredients readily available like the apple, were incorporated.

Whoever says that if something tastes good it’s bad for you hasn’t tried one of these.

The British recipe for ‘dow nuts’ dates to an early written account from 1800, but surely they were being made, but perhaps not written earlier than this. The French have always had it seems, a puffy fried pastry, most notably the Beignet. Then there are the Dutch and their method for olykoeks. Smithsonian Magazine said it best in an article from 1998 when asked to weigh in on the history and origin of the doughnut…“It is true that the humble doughnut does have a convoluted past that involves Dutch immigrants, Russian exiles, French bakers, Irving Berlin, Clark Gable and a certain number of Native Americans. And, yes, in its democratic ethos, its optimism, and its assorted origins, it does seem rather quintessentially American.”

Fast forward to Mr. Adolph Levitt, a Russian immigrant who, in the early 1920s, founded the Doughnut Corporation of America. Mr. Levitt is the inventor of the first automated doughnut machine. The automated donut-making process was featured at the 1934 World’s Fair in Chicago. The Fair advertised doughnuts as “the food hit of the Century Of Progress” and they became an instant hit across the country. Later, and as a part of its annual campaign to increase fall sales, the Doughnut Corporation of America catapulted its cider doughnut into popularity in the 1950s. The cider doughnut has been a chief fall icon ever since. Paired with a warm glass of apple cider for dipping, they are the perfect addition to any apple picking adventure.

Moist, tender, and super flavorful, these apple cider donuts are not only tasty, they are easy to make, too. Their sugary spiced coating makes them irresistible quite frankly.

The apple cider donut or doughnut, is a traditional cake doughnut. They get their flavor from cinnamon, nutmeg, and boiled and reduced apple cider which is used in the batter. Cider donuts are popular throughout the New England states such as Vermont and New Hampshire where apples are abundant. The Adirondack region of upstate New York and down into Pennsylvania is an abundant apple region as well, and cider donuts can be found, freshly made and still warm, at almost every farm stand that sells cider. You do not need to live in a state or region that grows apples to love and enjoy these mighty handheld classics that predate pumpkin spice. You only need cider. Not apple juice, apple cider.

Share a batch with friends and family who appreciate a hot, fresh apple cider donut.

Since I posting my Apple Cream Cheese Bundt Cake in early September, I have been asked for additional apple recipes in droves. I posted Shaker Chicken Pudding to help y’all out with that hefty load of apples you are sitting on, and now I bring you cider doughnuts. And despite these donuts not using an actual apple per se, they are still a HUGE transition from late summer into fall in terms of American food and food traditions. If you feel you must use an apple, one finely diced apple mixed into the better is absolutely fine and works great. I have done it before and loved the outcome. Any variety of apple will work but in my opinion, Gala or Granny Smith work the best. I’ve tried many recipes for apple cider donuts as well as different methods. It comes down to baked apple cider donuts or fried apple cider donuts.

I must make a point of highlighting this trusty gizmo, my nutmeg grinder. It’s elegant and oh so precise at grinding/shaving FRESH nutmeg. I am unsure how I ever cooked and baked without it before, but if you do not own this, consider nabbing one. Brought to us from Peugeot, the leaders in French kitchen precision tools. Kitchen necessaries, click image for pricing.

You can experience all there is to love about homemade apple cider donuts with this recipe.

Both the recipe as well as the method I present herein, are largely from my Grandfather’s recipe and method for potato crullers. I have of course, swapped out mashed potato for reduced and concentrated apple cider. The end result is a crispy outside with a fragrant and tender crumb inside. These are the BEST cider doughnuts. I enjoy baked apple cider donuts but am frying in this recipe. I prefer how the fry helps to achieve that crispy exterior. That, and the GORGEOUS and unmistakable golden brown color achieved makes them entirely appealing. To me, these are the traditional way of preparing and eating apple cider donuts.

The first step in making these donuts is cooking 3 cups of apple cider on the stove to reduce it down to 1 cup. Now you’re left with a thickened liquid that contains less water and much more apple flavor. Mine took about 20 minutes. Cool entirely before incorporating into batter. The concentrated cider will help to keep the dough moist during the very quick fry. This is an easy fall doughnut recipe adapted to be made at home.

There’s nothing truly better than biting into a warm, melt-in-your-mouth, fresh donut coated in cinnamon sugar.

This dough is very sticky which can make it difficult to work with. I specify placing the dough in your refrigerator for about one hour before rolling it out to cut. This and a well-floured surface makes handling the dough a lot easier. I used this doughnut cutter to cut out the doughnuts. I fry the donuts and I also fry the donut holes 🙂 You can use a biscuit cutter or improvise with a round glass coated in flour, however I advise a donut cutter at just under $10.

After the doughnuts come out of the fryer I drain them on paper toweling. They are then tossed and rolled in a mixture of cinnamon and sugar. It is important to toss and roll the doughnuts in cinnamon sugar as soon as they come out of the oil. A clean brown paper bag is genius for this part of the method. Just drop the donuts in, seal, and shake and shimmy the bag, and they are well coated. I then cool them the rest of the way on a wire cooling rack set atop a lined baking sheet for easy cleanup. Cider doughnuts weep. Therefor, they do not store well under plastic, in plastic, under foil, or in foil. Store the product of all of your effort well in something breathable and absorbable. Use a brown paper bag and just fold the top and leave on the counter. No need for refrigeration. Oh, but DO perk a pot of hot coffee. Yep. You’ll want the coffee for dunking… 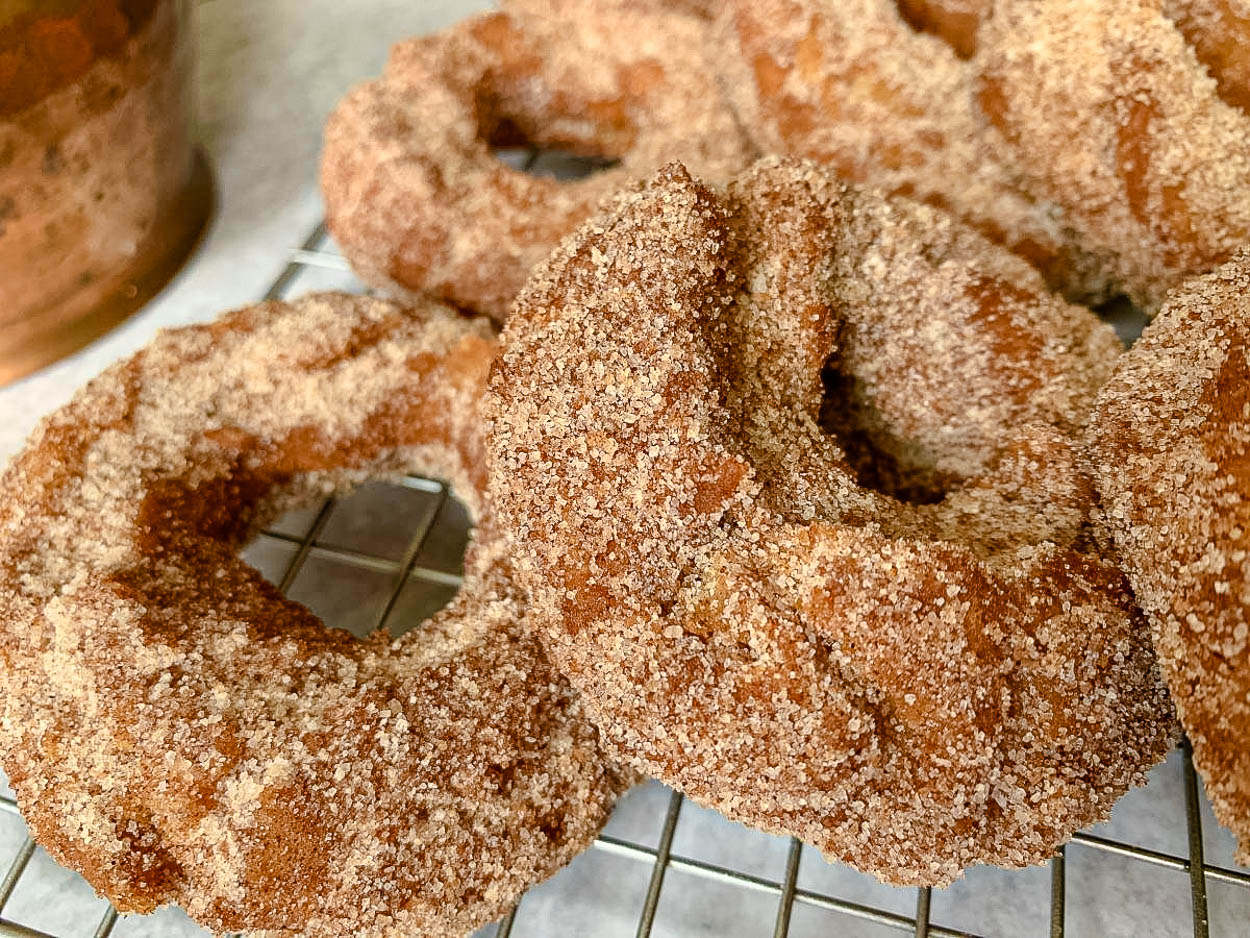 for the cinnamon sugar coating