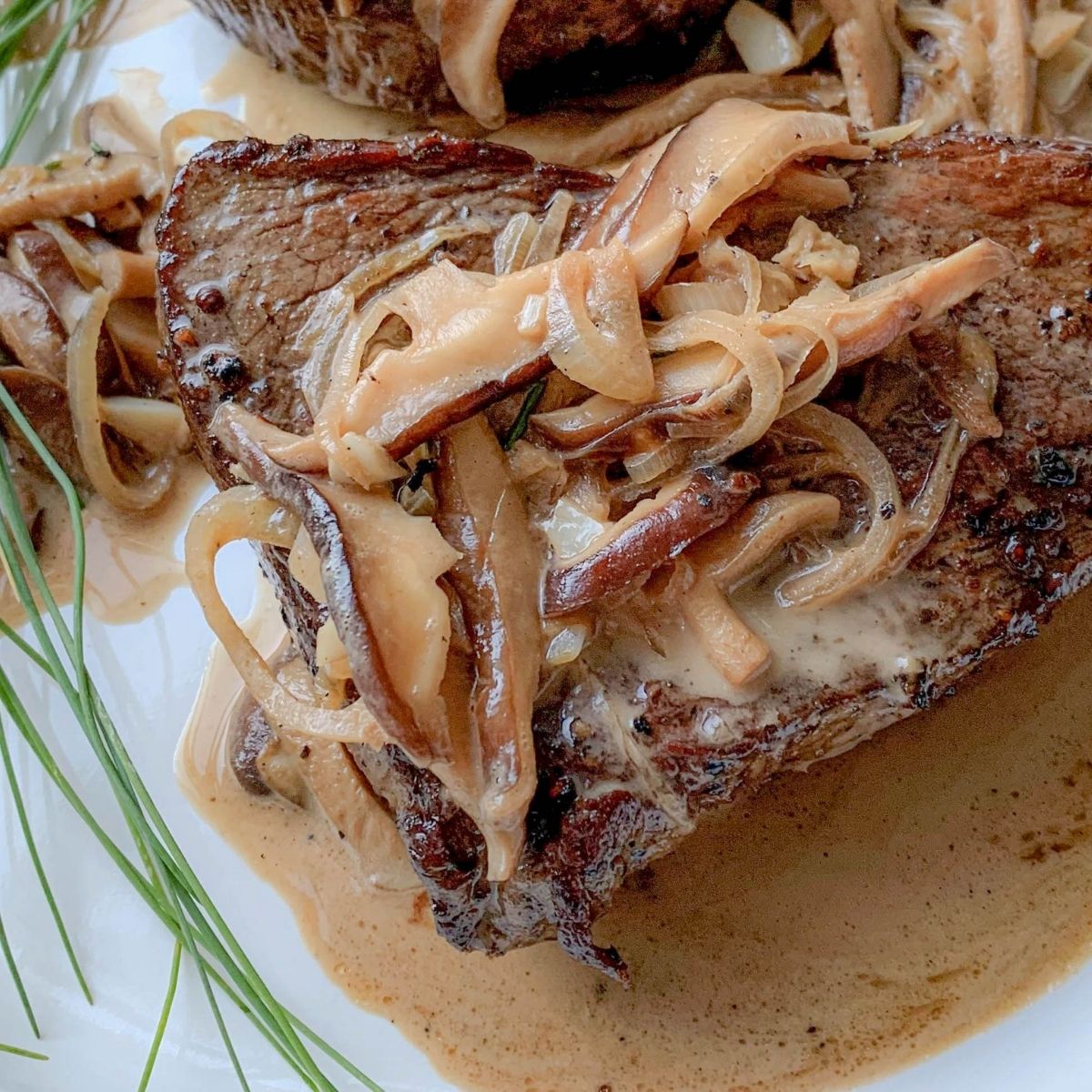 Season your skillet and peel some spuds for a Cast Iron Ribeye With Shiitake And Shallot steak recipe that makes date night an at home event!

Is A Cast Iron Skillet The Best Way To Cook A Steak?

There are MANY great ways to sear up a fabulous steak, but cast iron is an absolute favorite for chef’s. There is NOTHING like a signature sear from a sizzling HOT pan. Cast iron not only gets good and hot, but also holds that heat for a long time making it the perfect vehicle for a properly cooked steak every single time.

This is an impressive steak dinner for two or four people depending on how big your ribeye’s are. For this recipe, I specify two (2) 12 ounce ribeye’s, but really, the pan sauce makes enough for four if you were to sear a couple extra steaks.

I say this is impressive because it’s truly restaurant quality even if you are not necessarily an at-home cook. Ribeye’s are the ‘cut of all beef cuts,’ so it’s hard to mess this cut of beef up. Just go slow.

It begins on the stove top and ends in the oven. The pan sauce is fast and altogether decadent. I recommend mashed potatoes for serving, but really any starchy side will go.

And if you pull this off, your family and friends will think you’ve taken lessons from a chef. Yeah, if I do say so, this is that easy and THAT GREAT…

This recipe was a “happy accident” that arose from a cold steak sandwich experiment several months ago. The ingredients may seem like an odd combination, but the end result is flavorful.

What I ended up liking the most about how this dish shaped up was the pan sauce. Fresh shiitake mushrooms and thinly sliced shallots are combined with garlic, sherry, and of all things teriyaki sauce.

So peel some potatoes to mash, as you’ll want something comforting to pool this gravy in alongside your steak.

Do You Have What’s Needed To Make A Cast Iron Ribeye With Mushroom Sauce? Check The List!

What Is A Ribeye Cap?

You’ve heard of prime rib. Well the ribeye cap is the succulent out portion of the prime rib roast. It’s also referred to by many as THE most delicious cut of beef.

When I visit my local big box store, I always cruise the beef to look for this cut. If I don’t see it, I can usually waylay a butcher to inquire.

This may seem extravagant, but I am not ‘doing’ red meat daily, so a seriously GREAT CUT is worth the money to me for the few times monthly that I prepare a steak.

What Is The Best Way To Cook A Ribeye Steak In A Cast Iron Skillet?

This method requires high heat. That said, the intention here is to NOT to smoke up the entire inside of your house! So to answer the first question regarding the best way to cook a ribeye in a skillet, you will need to secure canola oil or vegetable oil.

Olive oil is great for lots of things, but not for cooking at high temperatures. Olive oil has a very low burn point. Meaning heat the olive oil in your skillet, and you’ll be sending smoke signals to the neighbors before your steak even hits the pan.

Canola oil (or vegetable oil) is a high heat oil. You still need to monitor the smoke point by not walking away from the stove, but you likely won’t have to open all the doors and windows to keep the smoke alarm from going off.

Back to the best way to cook that ribeye in your cast iron. Use a piece of paper toweling and dampen it with a tablespoon or two of the oil. Wipe the entire bottom and sides of the skillet with the oil-laden towel to coat every surface. Now you’re ready!

Check out some of the tools I like. All products featured on Not Entirely Average are independently selected by yours truly…click any image for details and pricing.

Place your cast iron pan over medium high heat. Measure out 1 additional tablespoon of oil and drop it into the pan. Watch that oil until you see it shimmer. You’ll know.

Use tongs and a piece of clean paper toweling to mop that oil up. That’s right. That oil is ONLY used to tell us when the pan is ready, but we don’t need it to sear the beef. The fat in the meat will act as its own oil for searing.

Lay each of the ribeye steaks into the sizzling hot pan and don’t move them. DON’T MOVE THEM! Allow them to achieve that pan seared element by giving them (1 to 2 minutes per side for a 2 1/2-inch steak) the time to develop that crust and the hot, hot, hot space to do it in.

What Is The Best Seasoning To Put On A Ribeye Steak?

Kosher salt and black pepper. Never over complicate it.

Remove your steaks from the refrigerator 30 to 40 minutes prior to commencing cooking. Liberally salt and pepper all sides and just let it sit until the meat has more or less come to room temperature.

Salt does this “thing” to red meat. It somehow magically makes meat juicier IF it’s given the right amount of time prior to a cook to work that magic. And yes, ‘liberally’ means don’t be shy. Most of that salt will cook out, so not to worry.

It’s hard for me to answer this question this time around because there isn’t much I would do to change this recipe up. With the exception of substituting whole button mushrooms, I would not even change out the shiitakes.

I do however love a good steak butter. If you were to assemble a nice compound butter using unsalted butter as your base, I could see Worcestershire, fresh herbs such as chives, and even a spot of cayenne making a gorgeous steak butter to add just before ladling on the sauce.

How Long Does A Ribeye In Cast Iron Take To Make?

This method begins on the stove, does a brief stint in the oven, and then finishes back on the stove. That said, the thickness of your steaks will dictate how long they are in the pan.

I specify a 2 1/2-inch thick ribeye. Try to get as close to that as your butcher has available. Also, try to get the freshest and best quality cut you can. It’s hard to get a bad ribeye, but hey, it does happen…

All in all, this recipe took me 35 minutes from start to finish. The temperature I cook and rest my ribeye to is pictured below, a firm medium. It works out to 2 minutes per side, then another 6 to 7 minutes in my oven for the 2 1/2-inch ribeye’s I cooked.

I made certain my steaks were at room temperature before they hit the hot pan. A cold steak doesn’t cook up the way a room temp steak cooks up. That, and you’re steps will certainly move a lot faster.

What To Serve With A Cast Iron Ribeye?

The sauce for this should be enough to do the steak and a nice green vegetable alone. BUT…that sauce…it begs to be pooled in a bed of fluffy mashed potatoes.

Spätzle would also be nice with this recipe, too. Just a bit of salted butter and chopped parsley added would be a bright accompaniment to this dish.

Ingredients For Cast Iron Ribeye With Shitake And Shallot

Please Note that table salt and iodized salt are NOT substitutions for Kosher salt. Do not use table salt or iodized salt in any of the recipes you find on Not Entirely Average UNLESS specified otherwise. Notes the oil is ONLY used to indicate when the pan is ready, as it will shimmer. We don’t need it to sear the beef. The fat in the meat will act as its own oil for searing.