With Many Thanks, This Recipe Courtesy Of Nordic Ware

Why Is Fall The Best Time To Bake A Cake?

Shorter days, cooler nights, and the everchanging autumn foliage inspire something in us all. Magical moments in the kitchen culminate when these strong visual and olfactory reminders motivate us. Suddenly, the urge to employ fall spices like fragrant cinnamon and abundant autumn yields like pecans gets the better of us. We seek to cook and bake all things tasty, warm, and ultra-comforting. If you are a baker, and especially if you’re a non-baker like me, and you are on the lookout for an easy fall cake recipe, search no further.

This is a classic sour cream cake that incorporates brown sugar, cinnamon, chopped toasted pecans, and plenty of love...

This gorgeous cinnamon swirl Bundt cake recipe is so fabulous I can hardly wait to share it. I've been sitting on the method for over two years. Foolishly!

I finally baked it up last week and was shocked at how incredibly PERFECT everything about it was. AND MOIST! This single attribute may be the most important of all to me, as I detest a cake that bakes up dry or dries out the minute I cut into it.

This is a classic sour cream cake that incorporates brown sugar, cinnamon, chopped toasted pecans, and plenty of love. It feeds twelve and is PERFECT for that bake sale commitment, book club take-along, holiday dessert buffet, or just for you and yours.

The cake batter is dense but bakes up surprisingly light with the use of cake flour. So put the coffee pot on and hunt down your apron! You've got a cake to bake!

Do You Have What's Needed For This Cinnamon Bundt Cake? Check The List!

So, I cannot lay claim to having developed this delicious cinnamon Bundt cake with sour cream. In fact, as far as cake recipes go, I oftentimes struggle with batter made with anything more than boxed cake mix. However, I continue to try.

The handful of cakes I have posted on Not Entirely Average have been the handful of true winners I have conquered. You won't ever see too many cakes here because as I have admitted time after time, I am not a good baker.

But…THIS RECIPE…has offered me the perfect ingredients to bake up a darn near perfect cake. I stumbled upon this method at the same time I purchased the Nordic Ware Crown Bundt pan.

The recipe was per usual put aside. I told myself I'd bake it in the fall. I just didn't know it'd be two seasons later! Better now than never though, right?

This cinnamon swirl cake recipe is somewhere between a cinnamon pound cake and a pecan Bundt coffee cake. **And, as an update, I am FINALLY about to post this recipe, and a full five days AFTER the bake, this cake is STILL MOIST!!!

How To Make A Cinnamon Bundt Cake?

This cinnamon Bundt is a very easy and straightforward cake to assemble. The batter comes together like any other, by combining the dry ingredients first, then the wet ingredients.

Mixing the two together is a piece of cake, haha! There is no creaming, no folding of egg whites, and definitely no need for expensive kitchen tools.

I did invest in the Nordic Ware Crown Bundt as a gift to myself a few years ago, so that is likely the most expensive piece of equipment I used for this dessert. What I will say about this pan is that it is a HEAVY DUTY pan.

That said, choose your pan of choice carefully so as not to dry out or overbake your cake. The kitchen tools we use really do matter.

I've baked several cakes in this Nordic Ware Anniversary Crown Bundt pan and they emerge from my oven perfectly moist and terribly gorgeous every single time.

Having assembled this cake and have it emerge from my oven basically the best thing I've ever baked, there is not much I would personally change. Adding is a different story.

I could see an opportunity for shredded coconut, chocolate morsels, bits of toffee, or maybe even a single very well chopped apple being scattered atop the pecan sugar mixture filling. And I could definitely see any of those working here and playing amazing roles in the flavor of this cake.

How Long Does It Take To Make This Cinnamon Bundt Cake?

The preparation time for this glorious taste of autumn is 30 minutes. The bake itself once the cake is assembled is 1 hour. I ran over by 10 minutes because I was still slightly jiggly in the middle when I tested at 55 minutes.

The runover did not affect the texture or the flavor of the cake whatsoever. It was moist and very rich.

How To Serve Cinnamon Bundt Cake?

Honestly? This cake stands on its own. I used Nordic Ware's very pretty Bundt pan, so the slices are as beautiful on dessert plates as the whole cake is to look at. The cinnamon sugar center swirled with toasted pecans is well worth the 30 minute preparation time.

If I had to choose one thing to add if serving to company, I might pair the slices with a French vanilla ice cream or a dollop of homemade whipped cream. 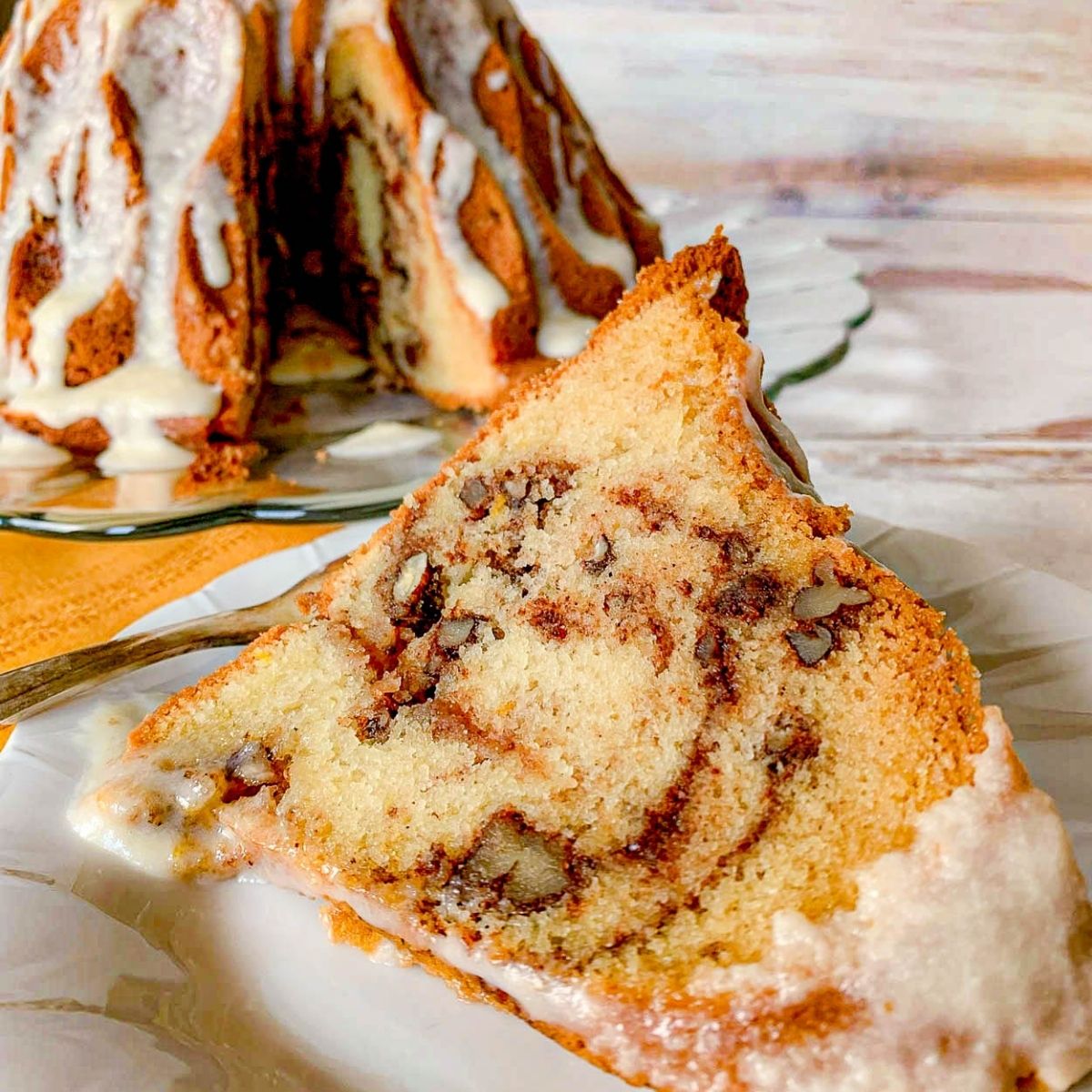 for the sour cream cake batter

for the cinnamon pecan swirl filling

The Method per the Nordic Ware Kitchen recipe directions

for the sour cream cake batter

for the cinnamon pecan swirl filling

for the vanilla glaze

Please Note that table salt and iodized salt are NOT substitutions for Kosher salt. Do not use table salt or iodized salt in any of the recipes you find on Not Entirely Average UNLESS specified otherwise.

FREE copy of 'From Jezebel Sauce To Frogmore Stew, 14 Recipes From My Charleston Lowcountry Kitchen

Have YOU downloaded YOUR FREE COPY of my ebook yet? click here to get your copy of 'from jezebel sauce to frogmore stew, 14 recipes from my charleston lowcountry kitchen.'

Don't Want To Miss A Thing?