Make Classic Southern Potato Salad and never give too much thought again about what to bring to a potluck dinner or a friend’s cookout.

Potato salad is serious business in the South and this straightforward potato salad recipe is a crowd pleasing classic that pairs nicely with just about any grill item it goes up against, from barbecue to burgers, steak, chicken or ribs! This is a classic southern potato salad with eggs.

This traditional potato salad recipe plates brilliantly with my

or a superbly Marinated Steak from your grill.

Gatherings here in the South do not happen without a big bowl of homemade potato Salad.

March, April, June, and July are cookout months down here, and this summer, I would guess I have prepared the salad at least six times. If you remember your mother cooking a dressing as part of her potato salad ingredients, you may want to try my recipe for A Hearty Penna Dutch Potato Salad.

While potato salad may not necessarily be ‘southern’ in origin, to too many people it remains valid that Southerners have taken a reasonably good dish, booted up the ‘element of spunk,’ and declared the fresh adaptation a Southern classic. Potato salad reminds me of my Grandfather. Gramps was that one member of our family who wore the badge of “Absolute Potato Salad Maker.” This recipe is basically his, as best I remember it.

Nothing fancy or extravagant, just potatoes, eggs, good mayonnaise, onion, celery, a little bit of yellow or Dijon mustard, some pickle relish, salt, and pepper.  A simple, basic, satisfying dish that is full of flavor and texture. It is truly the ideal accompaniment to a juicy burger hot off the grill. His was the ‘potato salad among potato salads.’ I of course thought it was the best potato salad.

Classic Southern Potato Salad is an easy potato salad recipe. It yields a delicious sequence of potatoes, hard boiled eggs, sweet onions, celery, pickle relish, mayonnaise, yellow mustard, and seasoning. This classic potato salad is perfect for potlucks, cookouts, and picnics. I would challenge you to find traditional potato salad recipe or a southern potato salad recipe without eggs, but you can omit them in this recipe if you do not want them.

So, “Absolute Potato Salad Maker” is a highly coveted title. After my Grandfather passed away, I never tasted potato salad like his. I promise you, every family vacation that we would pile in the station wagon and motor on down to Myrtle Beach to visit with my grandparents (we lived in New Jersey, then), my Mom would make the call ahead and request Gramp’s potato salad for me. Once we got there, it was sometimes the ONLY thing I would eat despite my Grandmother cooking up a horde of food on account of our visit. My Mom and my cousin Holly both come close to his. But I like to think I was the major consumer of his potato technique, and as good as Mom and Holly’s salads are, they are not quite Gramp’s.

Try these additional fabulous salads, including

I guess that the badge of ‘Absolute Potato Salad Maker’ is somebody who has spent years in the kitchen and is respected for their ability to cook well. Despite being an okay cook and a now food blogger, it would not be until last year at about this time, that I gave his potato salad a shot. HA! Now, if I were honest and told you how many times I tried (and epically failed) to recreate this potato salad, you would never believe me.

Yet, and for what felt like the hundredth time, my Mom and I tackled potato salad…again. But, to make you understand, we are not trying to just make any potato salad, we were trying to make Grandpa’s potato salad. No celery seed or apple cider vinegar was lending the right flavor to this. And while mayonnaise counts, we found for us it was not going to be Miracle Whip. Low and behold, we made potato salad that makes us think we are there…a southern style potato salad.

What Is The Best Potato to Use in Potato Salad?

Not all potatoes are created equal when it comes to making this style potato salad. Do not use red potatoes. Use starchy potatoes that get a little bit soft when you cook them. Russet potatoes have a higher starch content, which makes them fluffier than other varieties of potatoes. A waxy potato such as a red potato will not do for this southern favorite. I use russet potatoes almost exclusively for this recipe. They yield a mealy texture and they also break down well. Yukon Gold potatoes would be my second choice. And since this method specifies a portion of the cooked potatoes be mashed, russets are the easiest to run through a ricer to achieve this.

This cool, creamy, and slightly sweet dressing cloaks tender potatoes and crunchy onions and celery in this virtuoso Classic Southern Potato Salad. This is a no-cook dressing, a contrast to my wildly popular Hearty Penna Dutch Potato Salad.

How To Make Potato Salad?

Potato salad also depends on perfectly cooked and seasoned potatoes. The best potato salad recipes have a secret step in the method. Most of you probably add salt to your boiling water, but do you add sugar? This is key. Forget about ‘skin-on’ and peel and dice the potatoes before boiling them. This allows the salt and sugar in the water to absorb well. You will have effectively seasoned your base. Also, hard-boil the eggs ahead of time. Popped into the refrigerator for two or more hours gives them ample time to cool down entirely before cutting. Mom always says to do this no matter what you are putting eggs into, so it was automatic for me. Potato salad recipes with eggs were not as common up north. A potato salad recipe was just that, potatoes.

Some recipes call for either dill pickle relish or sweet pickle relish, or a combination. I usually add a little dill relish and a lot of sweet relish. My ratio is 3:1, but taste after mixing so you can get your salad exactly the way you will like it. Lastly, I like a combination of both mash and chunk, so I rice about 1/3 of the cooked potatoes while they are hot and stir them together with the chunks. If you do not have a ricer, you can use a basic potato masher or run the cooked potato through the openings on a colander. You are not “mashing,” rather breaking apart into the smallest bitty bits. Think fluffy and airy. While you need to allow time for this salad to chill before serving, it’s a straightforward, easy method incorporating just a handful of basic ingredients. 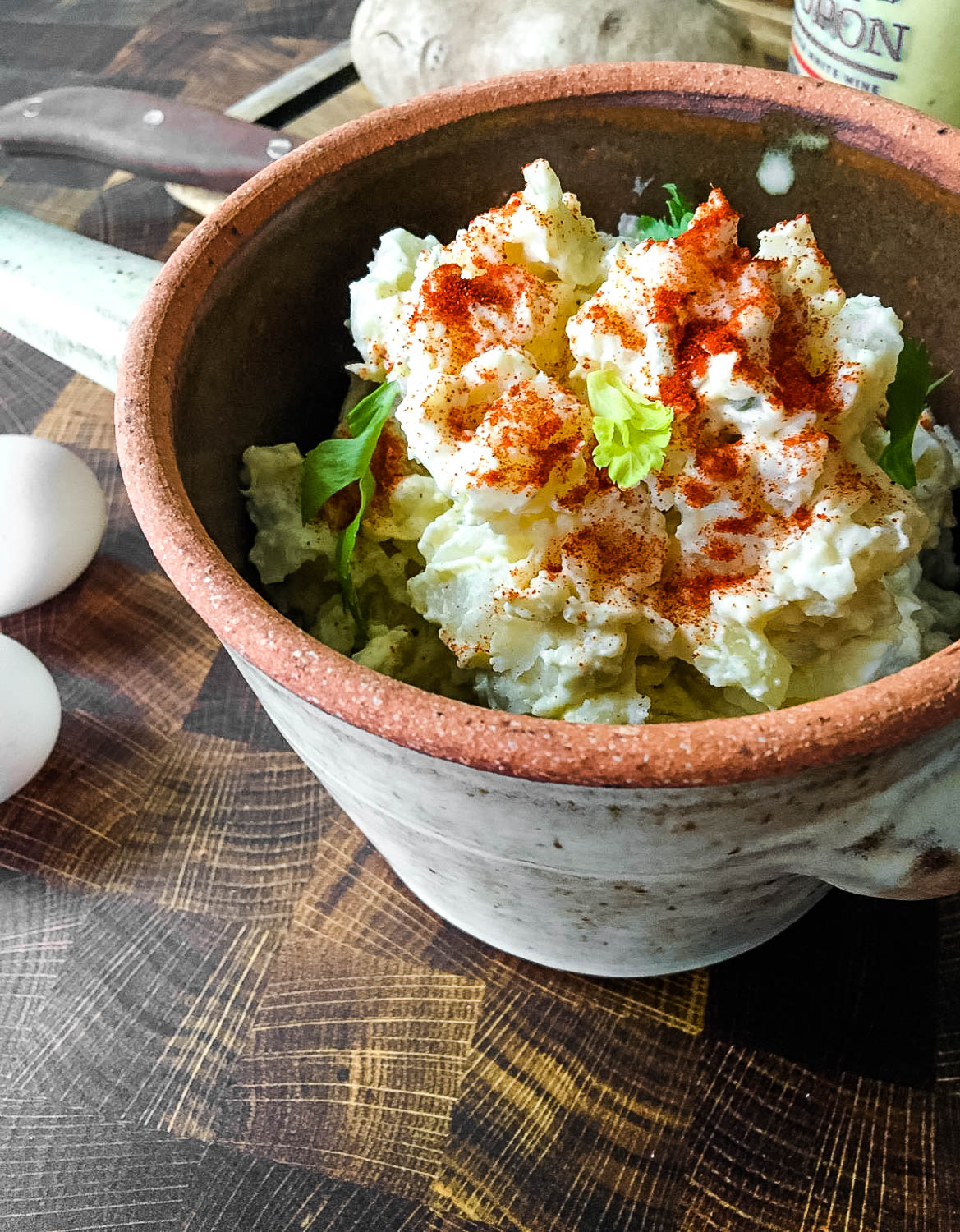 for boiling the potatoes