An icy cold beer and a bowl of Coosaw Island Creamy Cold Crab Dip will put you on a trajectory back in time to the early days of the Lowcountry of South Carolina.
Jump to Recipe Print Recipe

A visit to the Lowcountry of South Carolina will change your outlook on life. Yes, I said 'life.' An icy cold beer and a bowl of Coosaw Island's famous cold crab dip will hasten that new found clarity...

An icy cold beer and a bowl of Coosaw Island Creamy Cold Crab Dip will put you on a trajectory back in time to the early days of the Lowcountry of South Carolina. Just visiting the Sea Islands of the Lowcountry is a mood-changer. It is a place that has not largely changed since the beginning. The road stretches for miles in between passing an old service station or a burned out cotton dock. And whatever your destination, you are sure to gaze upon remnants of forgotten plantations and quaint fishing hamlets as you explore. 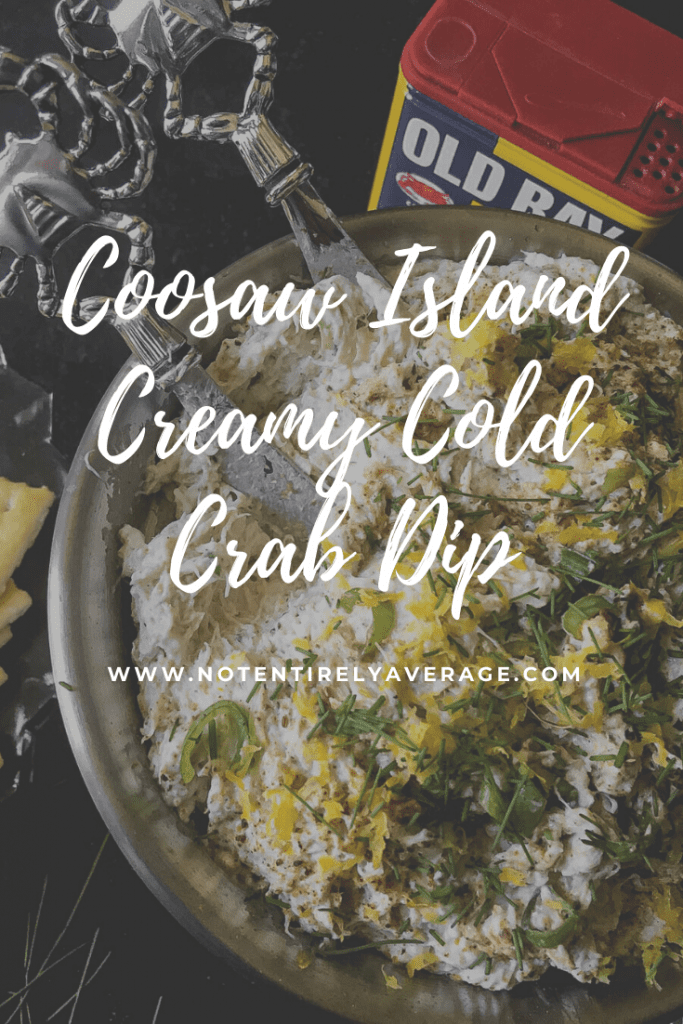 Coosaw and Judge Islands flank Morgan River to the Southeast near its westerly cruising limits and Coosaw River to the North. It is a sparsely populated sea island in Northern Beaufort County, South Carolina.

Fifteen years ago, I came here to visit my parents. They'd moved here to retire and sold the little house on Madisonville Road that David and I grew up in. For the longest time, I was gutted that the property did not belong to us anymore. I could not understand why my parents would give all of that up; the acreage, the vast gardens of vegetables and fruit trees, the 40+ years of memories, and most of all, our sweet house. The Lowcountry is known for its scenic marsh, sparkling bodies of water and ethereal silence. It is a place whose secrets have yet to be revealed...

But it is still something that happened on that initial visit that to this day, I cannot put my finger on. Something mysterious and captivating and mildly sinister all at the same time. It spoke to me loudly, but in a whisper. I heard it, I tasted it, and mentally, I've never been the same since coming into contact with it. I knew I needed to be here. This, the ghosted earth that is the Lowcountry. The feelings this place stirs in a person are real. The turbulent history, the lives of many, and the emotions that once dwelled here are all but forgotten rumors now. Only the stories of the Gullah Geechee paint the history of this forgotten place that time has left unchanged. The coiled Sweetgrass basket is a historically significant African art that was brought to America by enslaved Africans from the Windward and Rice Coasts of West Africa in the 17th century. The first known baskets in the Lowcountry were fanner baskets, used in winnowing rice.  South Carolina made, click images for pricing. 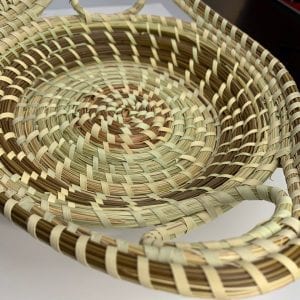 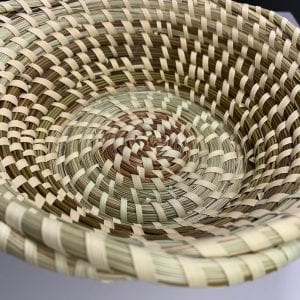 The Sea Islands are made up of over 100 islands along the coasts of South Carolina, Georgia, and northern Florida.

Our adventure day tripping the Sea Islands was solemn. In the many hours we spent taking every bend in the road, we passed no other cars. We saw nobody out working any of the boats. We ended up half starved from not seeing any place to grab a bite for lunch. There was just...nothing. Nothing but pre-Civil War farms and tiny signs marking native American shell rings. The drive back to Charleston would be long, so we ventured into sleepy antebellum Beaufort to find food. It was easily 95+ degrees out. It was my first year experiencing the Carolina heat and humidity and it was brutal on me. I needed air conditioning, a tall glass of water and something substantial. Winding along the ocean and through saltwater marshes, the islands are rife with indigenous wildlife, migratory birds, sea grasses, maritime forests and more. Pirates, farmers, and fisherman are all a part of the Sea Islands history going back hundreds of years.

I first tasted Coosaw Island Creamy Cold Crab Dip at a waterfront eatery there in Beaufort. No frills, just ridiculously fresh crab meat, hints of lemon, bits of chive, and a fancified fan of Captains Wafers. I was in Heaven. Our waitress brought over a bucket of beer on ice, and we refreshed. I remember thinking how quickly that big bowl of crab dip was disappearing and quickly ordered another. My friends and I sat for nearly 3 hours, laughing and getting on and dissecting all we had seen that day. I knew we were probably staying the night in Beaufort... 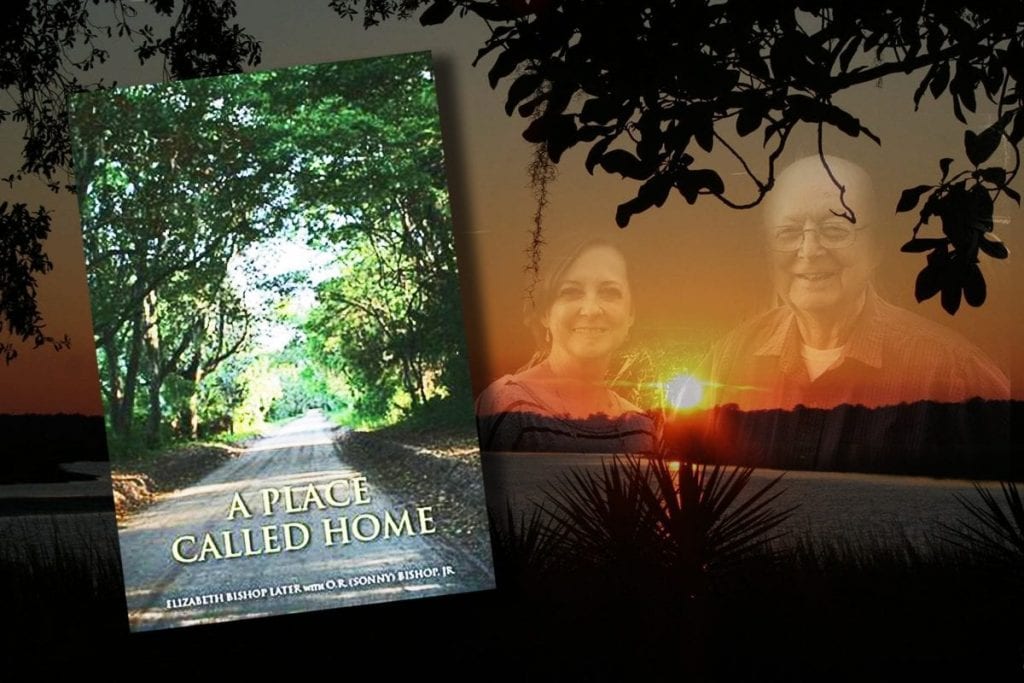 On St. Helena Island, South Carolina a quiet tidal creek flows past a charming and beautiful place called Yard Farm - formerly the Fuller Plantation. Using factual history, personal stories, and original photographs, the authors weave a narrative that is rich in perspective about what that small piece of land has meant to the people who have called it home. A worthy read for anybody who has the Sea Islands and Beaufort surround in their hearts. Click image for pricing. The Gullah are descendants of freed slaves who settled here after the Civil War ended. Today, they keep the traditional culture alive with examples of ancestral crafts, textiles, and a beautiful dialect only natives to the Sea Islands seem to understand.

The one thing I was wise enough to do before we paid our tab was to inquire about the ingredients for Coosaw Island Creamy Cold Crab Dip. Our waitress was all too happy to yank a tired looking African American man in his 60s out of the kitchen to talk to me. He was cautious at first, perhaps because he thought I was about to make a complaint, but his trepidation soon turned to elation when I asked for his recipe. The recipe as I present it here is without traditional mayonnaise as an ingredient and tweaked slightly. It can be heated to serve as a hot appetizer, or chilled as I intend it herein. It is EXCELLENT piped into choux pastry as a savory profiterole... Please note that the cream cheese should be soft enough to mix using the tines of a fork. Allow cream cheese to soften on a counter for at least 2 hours.