If you're craving a warm and gratifying authentic Dublin Coddle, everything you want in a traditional Irish dish is found right here. It's a one pot wonder.

Why Does This Recipe Work?

A tried and true Irish Coddle recipe. This dish is cooked low and slow and all in one pot. Once the stovetop prep is completed, it goes into a low oven to braise in a gorgeously constructed stock for anywhere between 2 and 4 hours. The longer the braise, the deeper the flavor the resulting pot liquor becomes. The potatoes absorb the sweet caramelized onions and smokiness of the bacon while simmering in the pot liquor. Meanwhile, the stout breaks down the starches, marrying everything. The end product is a highly reduced, perfectly tender layered Irish stew. Pork sausage or bangers, bacon, onions, potatoes, and stout are a phenomenal combination. The beer may be omitted and beef broth used in its place if preferred. The stew may also be served chunky, or half the potatoes and juices mashed and served alongside the stew.

PIN This Coddle Recipe To Cook Up Later!

The Foundation Of This Dish Begins With Irish Sausages Called Bangers

Recipes involving bacon and sausage, in this case Irish bangers, are right up there on the top of my list. This recipe for a Dublin Coddle is comfort food of the utmost level. It's a welcoming dish similar to stew assembled using smoked bacon, pork sausages, a ton of onions or leeks, and potatoes. I prepare my coddle in my Dutch oven. It is the easiest piece of kitchen equipment to get this job done.

Find the recipe for my 3 Ingredient Buttermilk Biscuits and bake a batch to accompany this fabulous Dublin Coddle.

Beginning with the smoked bacon, every single ingredient is browned, rendered, or caramelized in the Dutch oven before being assembled and popped in a very low oven. The coddle or 'long simmer' also gets chopped fresh parsley. a few cloves garlic, and stout.

If stout isn't your thing, substitute beef broth. I like to mimic the stout by adding 1/4 cup of club soda to 3/4 beef broth. Works like a charm! The resulting pot liquor produced from this long braise is simply outstanding.

In this photo, you'll notice the bed of 'mashed potatoes' the banger is nestled on. Once the Coddle is done, I use a big spoon and remove about half or a little more of the potato and onion mixture from the Dutch oven to a large bowl. I also add some of the smoky bacon and rich pot liquor to that bowl and I "rough mash" the potatoes. What I get is something in between mashed and lumpy mashed. I spoon a bit of the remaining stew, pot liquor, and a banger into each serving bowl. Oh, and I always serve Dublin Coddle with my 3 ingredient buttermilk biscuits.

I know I will be asked if this dish can also be assembled in a slow cooker. I think to that the answer is yes. It would however still require browning, rendering, and caramelizing via the stove top, so no longer a one pot meal.

I keep my oven temperature at a steady 300 degrees F. Two hours may or may not be enough for the potatoes to sufficiently coddle, so if preparing in the crock pot, you may need a third or even forth hour of cooking. I have not yet tried this in an instant pot and do not plan to. There is just something about low and slow that gets lost with many of the dishes we are attempting in those instant pots…

Whimsical Springtime necessaries to invigorate your surroundings and perk up your Irish kitchen. Click any of these images for pricing and availability.

I enjoy experimenting with new recipes. I REALLY enjoyed this one for a few solid reasons. As I shared with you in my post for Irish Beef and Stout Stew, I have only recently learned of the Irish heritage in my DNA results. I was able to (easily and quickly) locate my 3rd Great Grandmother, Eliza Coffin. She was an Irish immigrant to New York City in 1835.

I wondered what her life was like. I wondered what she must have felt leaving her parents behind. Looking into the history of the county she was from in Ireland, I discovered that two thirds of that county's population were dirt poor. The idea to assemble this coddle came from researching the area. Well, and my curiosity concerning Eliza...

Turns out Grandmother Eliza was celebrated for her contributions to the church. FOOD. Several things were mentioned in addition to an onion and potato coddle, including a mention of 'Sister Mary Custard.' Still working on researching the original ingredients for that one, but PROMISE to bring it forth once I've tested the amounts.

Is there such a thing as a stew with cabbage?

Irish food by itself has never excited me. Moreover, it's because I'd never tasted real Irish recipes prepared with authentic and available ingredients. I am a big proponent of "getting it right" by incorporating as much of an original ingredient list as I can find. If I choose to alter, omit, or add, it's because I found leverage somewhere in my research where that ingredient was used at least once.

This easy Dublin Coddle recipe has been altered with authentic ingredients to be able to count this among authentic Irish dinners. If you wanted to alter this recipe to suit your family's taste, traditional ingredients to consider adding would include cabbage, barley, leeks, or hard cider in lieu of the stout. It seems Irish dishes and Irish food recipes are highly forgiving…Irish soda bread is a great example.

Original recipes for soda bread call for dried currants. Well, it's pretty much impossible to purchase currants anywhere in the US. According to the US Department of Agriculture, "they had no choice but to have black currants banned, as the plants became a vector for a disease that threatened to annihilate all pines in America. It might seem extreme, however this measure was necessary to save the logging industry at that time."

not Irish, but it's green and feeds bunches Pistachio Cake

Do You Have What You'll Need For This Coddle? Check The List!

How Do You Make An Irish Coddle?

For most everyone, March equals corned beef and cabbage. I absolutely adore it. However, this Dublin Coddle is more in fitting with the foods my 3rd Great Grandmother would have grown up eating. Moreover, likely cooking it once she emigrated to America.

I tried this dish with the addition of barley which is most appropriate in terms of authenticity. I hated it. After reworking the steps to see where I could add additional sweetness to balance the savory, I was able to manipulate the onions.

No one flavor stands out in this dish, rather every layer, savory or sweet, lends support to the next.

First by SLOWLY breaking them down in a few tablespoons of the rendered bacon and sausage fat. Then by adding a heaping tablespoon of granulated sugar half way broken down. Lastly, I doused the onions in crème sherry to deglaze the pan, scraping up all of those precious browned bits. In about a matter of minutes, I was able to remove heaps of gorgeous golden brown caramelized onions from my Dutch oven so I could begin the layering process.

One thing I failed to mention is chicken broth. Conversely, and for as much as I like beef broth, chicken broth will add the most pronounced flavor to the resulting pot liquor. We want this because those potatoes are going to be 'coddling' and drinking this up. Use homemade stock if you have it. Finally, be sure to ladle a bit of that pot liquor into your bowl when serving. You will DEFINATELY want to sop that incredibly flavorful gravy up. I ultimately do so with a biscuit. 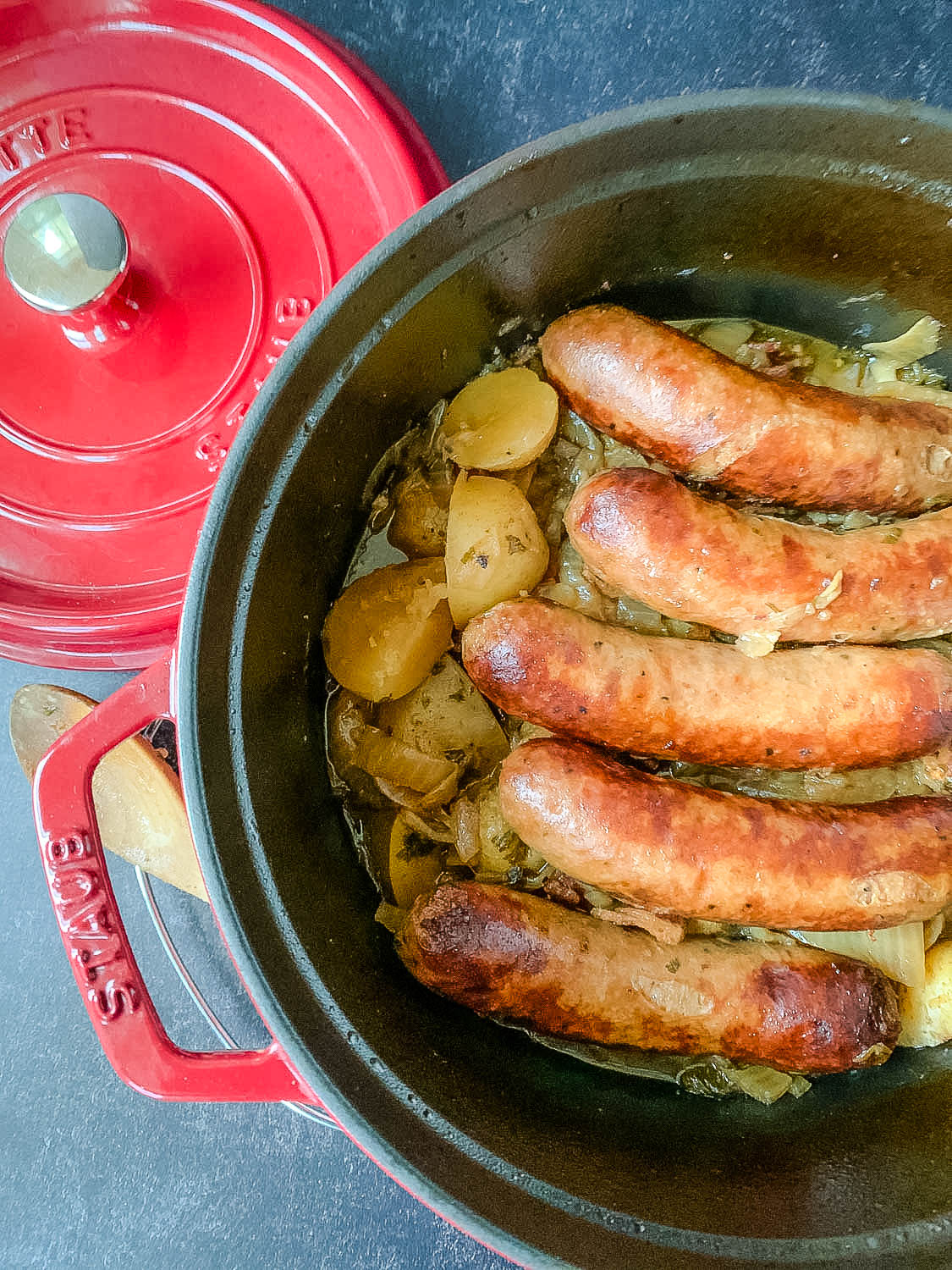 Did you know that it’s super easy to print out a version of a half recipe or even a double recipe on Not Entirely Average? Hover over the serving size (highlighted in blue, it says 5 on this recipe) and then slide the the white line to the left to make less or to the right to make more. This "calculator" allows you to play until you get the number of servings you want. Easy.

If you are not keen on using beer, substitute by combining 3/4 cup beef stock with 1/4 cup seltzer. Avoid starchy potatoes such as Russets and Idahos; they do not hold their shape when cooked for a long time. I specify Yukon Golds, and I will further mention that I try to find the baby Yukon's whenever possible. Irish bangers are a pork sausage seasoned with garlic and herbs and can be difficult to find here in the United States; if you are unable to locate authentic bangers around St. Patrick's Day, use a high-quality pork sausage as a substitute.