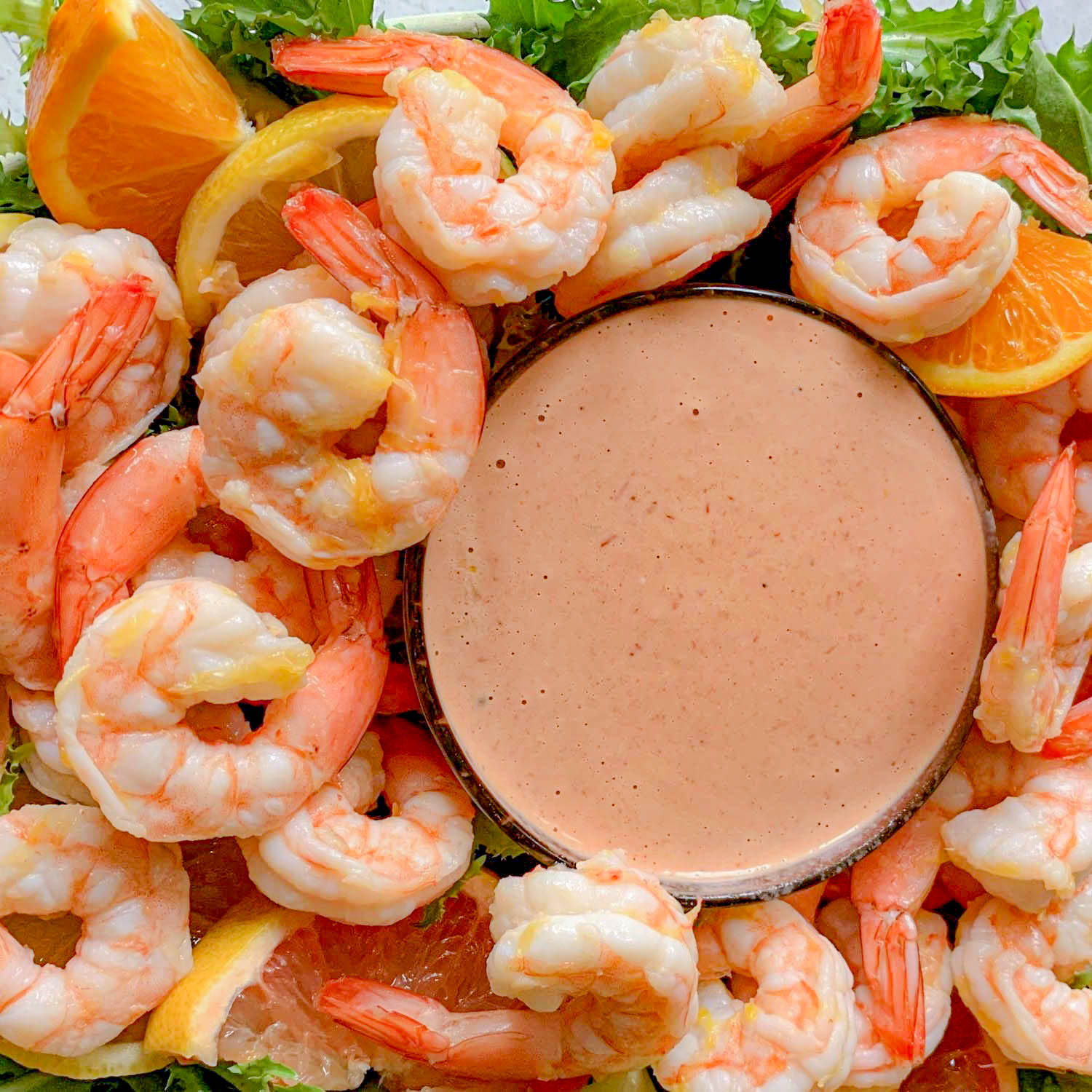 With much gratitude and appreciation, this recipe courtesy of our friends at Southern Living Magazine!

Fat Tuesday is days away. If you’re not a New Orleanian or have never stepped foot on Bourbon Street, you’ll still want to give Louisiana shrimp recipes like this one a try. Citrus Shrimp with Louis Sauce is a chilled shrimp cocktail of sorts…until you get to the Louis sauce, that is.

Louis sauce is a Cajun shrimp sauce recipe. Despite beginning as a shrimp cocktail sauce with horseradish, it derives serious zing from a unique combination of ingredients, among them chili sauce, Worcestershire sauce, grated onion, crushed red pepper, and hot sauce.

Fresh shrimp are boiled along with the juices from fresh oranges, grapefruits, a pineapple, lemons, and limes. I also toss in a whopper of a pinch of crushed red pepper flakes. You know, to keep things lively…

One pound of shrimp will serve approximately three people as an appetizer depending on the size of the shrimp. This recipe specifies the use of four pounds to serve 10 to 12 appetizer servings.

Adjust the measurements to fit your needs by hovering over the number of servings in the recipe card, then slide the ruler to the left or to the right to adjust.

Buy fresh, buy large, and buy US shrimp to support fisheries right here at home. If buying frozen, look for ‘US Gulf Coast Shrimp’ on the bag.

Louisiana shrimp recipes such as this one generally accompany the bags as small tear sheets, so be on the lookout.

Do You Have What’s Needed to Make This Louisiana Citrus Shrimp with Louis Sauce Recipe? Check The List!

for the Louis sauce

Then, there was THIS easy Cajun shrimp recipe. For whatever reason, it stuck out to me. And, as it turns out, it’s a GREAT RECIPE!

Admittedly, I only first tried this citrus shrimp boil about a month ago. Since then, I’ve made it three more times. Twice just for my family and twice for company. There is no question this is a hit.

This little dish has seriously amazing flavor. NOT KIDDING. This is a ‘whole family ‘ kind of food if you know what I’m saying.

What Is the Difference Between Cocktail Sauce and Louis Sauce?

Well, kind of a lot! As I alluded to in my intro, the shining star of this recipe is the Louis sauce. Yep, the sweet, succulent shrimp are seriously fabulous steeped in their citrus bath, but the Louis sauce is genuinely something extra.

If you’re not into spicy food, then hold back on the amount of cayenne pepper or crushed red pepper flakes you use. And know that if you make the recipe, the juicy shrimp AND the Louis sauce exactly as I specify, the heat is subtle. So, there’s room to go hot if you want to, but not too much to have to hold back if you’re nervous.

Aside from being a typical flavorful sauce recipe with horseradish (like cocktail sauce), Louis sauce gets a blast from up to ten additional savory ingredients. With maybe the exception of a fresh lemon, I can almost guarantee you’ve got the ingredients on hand as each of these are pantry staples.

What Size Shrimp Do I Need for Citrus Shrimp with Louis Sauce?

Be sure however when you go to purchase, and unless you personally love to sit and devein shrimp, that you look for tail-on, peeled and deveined medium-large shrimp.

I buy large shrimp. If I am unable to find them peeled and deveined, I take the time to perform this task myself, and toss the shells into a large stockpot with bay leaves, two garlic cloves, some small ribs celery chopped into smaller pieces and tap water to the top.

I boil over medium-high heat initially, then lower to medium heat and reduce by half. Shrimp stock which is what I ultimately produce, is a FABULOUS ingredient for replacing chicken stock in my Charleston Shrimp And Grits With Crab Gravy so there’s killing two birds with one stone right there…

What Is the Science Behind Shrimp and Citrus?

If you have a quick look at any of my photos in this post, you’ll see sweet bits of orange and lemon and grapefruit pulp sticking to the shrimp. You wouldn’t think it, but these stray bits of pulp lend so much flavor to sweet Gulf shrimp that have already been made sweeter simply by being boiled along with fruit juices.

The marinade bathes the shrimp for a quick 25 minutes while the shrimp cool. During this time, there will be pulp transfer and believe me, you want this!

And for those who will ask, yes, the boil specified in the recipe card is a short one – 2 to 3 minutes at most. Why? Will the shrimp be safe to eat?

When raw shrimp marinates in any type of citrus juice, the acidity in the juice “cooks” the shrimp turning it firm and pink just as if it had been exposed to heat. So, as we’re both boiling these shrimp and marinating them like a ceviche, they are fully cooked and absolutely safe to eat!

How Long Does Citrus Shrimp with Louis Sauce Take to Make?

The prep time for me in my little kitchen for the shrimp is about 30 to 40 minutes. This does not include the brief cook or the marinating time.

The Louis sauce is 10 minutes tops. I put this recipe right up at the top for an easy quick meal that takes really no time. If making just for your family and serving as a salad, it’s certainly an easy dinner recipe for sure.

How To Make Citrus Shrimp?

Ready to be blown away with an easy recipe? Good!

First, decide if this is going to be an appetizer platter where eaters will hand select shrimp to dip in a communal Louis sauce bowl, or individually plated salad-style appetizers which you may then chose to serve over salad greens and with toasted rounds of French bread. In this case, the Louis sauce may be drizzled as a lite dressing.

Then begin prepping your fruit. Everything should be fresh. The only exception I make is the pineapple, as I use canned juice rather than carving up a freshie.

For The Boil and The Marinade

You will need two lemons, two limes, and one orange. Cut them all in half and toss them into the largest Dutch oven you have.

For the marinade, you will need one each of a sliced lemon, orange, lime, and grapefruit. Add them to a large plastic zippered bag. Along with the sliced fruit, add orange juice, grapefruit juice, pineapple juice, and both lemon and lime juices.

Heat May Be Added or Lessened

I also add another teaspoon of crushed red pepper flakes to the marinade, but you may skip this if the extra heat makes you nervous. Remember, the outcome of this recipe in terms of ‘heat’ is subtle, perhaps moderate to those who steer clear of spicy food, so use your best judgment based on your eaters.

Add a full tablespoon of crushed red pepper flakes, a tablespoon of Kosher salt, and two cups of tap water. Place over high heat and bring the whole pot to a boil.

While the citrus mixture is coming to a boil, take a minute to prepare an ice water bath and set it right beside the boiling pot.

Gently toss the shrimp into the boiling citrus mixture. While the shrimp turn pink, set a kitchen timer to 2 minutes, 30 seconds.

Begin removing the shrimp at the 2 minute 30 second mark with a spider or slotted spoon and immediately plunge them into the ice water bath to cease the cooking process.

Drain the shrimp well. I go so far as to spill them out on paper towels and blot them dry. Then, I add them to the prepared marinade, seal the bag, and pop them into my chiller for 25 minutes.

Any further cooking will be taken care of by the acid in the citrus in a matter of minutes. This last step also really adds to the flavor of the shrimp. Call me crazy, but they’re ‘less shrimpy, and way more citrusy sweet.’

How To Make the Louis Sauce?

Get a big old bowl and a whisk and add everything to the bowl. Seriously!

A jar of chili sauce, a bit of mayonnaise, grated onion and lemon rind, horseradish, lemon juice, red pepper, Worcestershire, and seasoning all get combined to create a lovely and fragrant sauce for the marinating shrimp.

I also specify adding hot sauce to taste, but this can be withheld if you’re nervous about adding heat. Another swipe of a lemon across your microplane will garnish the surface prettily.

Chill the Louis sauce well until you’re ready to serve it. As it chills, it also thickens just a bit.

Can Louisiana Shrimp Recipes Like Citrus Shrimp with Louis Sauce Be Made Ahead?

The Louis sauce actually benefits from being assembled up to one day in advance. Whisk the sauce ingredients together and taste for seasoning or the need for additional horseradish or heat.

Spoon into a small bowl and cover with plastic film or add to an airtight container until ready to serve. Taste before serving and add additional hot sauce or the like if necessary.

The shrimp may be made up to 6 hours in advance. Simply follow through with the recipe instructions and remove the shrimp mixture from the marinade after the 25 minutes are up.

Transfer them to an airtight container to continue chilling until ready to serve. I would be remiss if I did not mention that I have tried making and storing the shrimp up to a day in advance, however they seemed to lose a wee bit of their flavor. Still really good, just not outstanding.

What To Drink with Citrus Shrimp with Louis Sauce?

I have two smashing Fat Tuesday cocktails that elevate Louisiana shrimp recipes – A Cajun Piñata and a Soul Train. A Cajun Pinata is loosely based on New Orleans famous Hurrican Punch, but with my twist. The Soul Train is a laid-back cat that is too cool for school if you know what I mean…

for the Louis Sauce

for the Citrus Shrimp

for plating and garnish

optional if serving as individual salads

Please Note that table salt and iodized salt are NOT substitutions for Kosher salt. Do not use table salt or iodized salt in any of the recipes you find on Not Entirely Average UNLESS specified otherwise.