You won’t need any special equipment for this tropical treat, just a cupcake pan (or two!) and 16 to 24 paper cupcake liners. Even what goes into your mixing bowl may surprise you, these rum cupcakes using cake mix.

Any flavor of rum works in this great recipe. I suggest using something flavorful such as an actual pineapple-flavored rum or a dark spiced rum.

Coconut rum could be used if you hadn’t anything else in the liquor cabinet, however it would not be my first recommendation.

I use an offset spatula to ice mine but allowing the buttercream to remain at room temperature ensures smooth piping using a 1/2-inch or larger star tip. There are tidbits of crushed pineapple in the buttercream frosting, so anything smaller could potentially cause the tip to clog.

For garnishing the tops, aside from the buttercream, think outside the box! Toasted chopped macadamia nuts, fresh pineapple wedges, crushed pineapple bits, or toasted coconut chips give this flare! Macerate the fruit for a real treat!

Do You Have What You Need to Bake Up This Pineapple and Rum Cupcake Recipe? Check the List!

Boozy pineapple coconut cupcakes are a real thing here in Charleston just now, to the point where they are appearing on dessert menus downtown at some pretty fancy restaurants.

I got the idea for these rum-infused cakes from a downtown menu featuring coconut rum cupcakes served with a warmed coconut milk and dark rum toddy.

The table next to ours ordered it and it was beautifully FUN! A large gold tray came loaded with the toddy, two straws, two oversized coconut and Jamaican rum cupcakes, and an array of tropical fruits.

Why not then exploit the best part and recreate the rum cupcake recipe at home? I selected pineapple because I like the way it compliments buttercream when it’s super cold!

Which Rum Is Best for Cake?

For either of those to stand out the way they’re meant to, choose to enhance the crumb with either a pineapple-flavored rum, a spiced rum, or another tropical fruit-flavored rum. I know I will be asked why I am leaving out a coconut-flavored rum such as Bacardi.

Honestly, it’s not that I am leaving it out, it’s just not the flavor profile that enhances pineapple and vanilla the very best. Yes, they go together, but all three are STRONG flavors which tend to compete with one another.

If you love coconut, opt instead for two or three drops of coconut extract in the batter, and choose a spiced rum for complementing the pineapple and vanilla.

Not a competition. These are pineapple-y, Dole Whip-ish delights. Coconut for me in these is only by way of shreds and possibly toasted chips as a garnish.

How Do You Infuse Cake with Alcohol?

To get the full strength of alcohol in any bake, opt to not cook the alcohol off. Adding alcohol to a simple syrup or melted butter and soaking the cakes layers is the most common way.

Using a pastry brush to ‘glaze’ the top of the bake while it’s still warm offers a more subtle nuance, a would be hint of rum. If neither of those tricks appeals, there is always an option to fold some of the liquor straight into the frosting!

In this recipe, we are doing two out of the three. The final product will require refrigeration unless of course there simply aren’t any left after you serve them!

Can Alcohol Infused Cupcakes Get You Drunk?

The recipe I’m imparting herein infuses the cupcakes and infuses the buttercream. The taste will be a whole lot stronger than a cupcake baked with alcohol in its batter.

For these two reasons, I do not recommend this as a treat or dessert for children. There are just so many other desserts that don’t require waiting until they’re 21!

How To Make This Rum Cupcake Recipe?

This easy but impressive dessert is inspired by the much-loved soft serve found at Walt Disney theme parks. Who doesn’t LOVE Disney Dole Whip??? It’s also heavily influenced by the cake made so popular in the 1960s and 70s, the Bacardi Rum Cake.

I like to prepare this batter and then later, the rum buttercream, in the bowl of a stand mixer. If you prefer to use a handheld electric mixer, simply grab a large mixing bowl with which to work.

If you are thinking of waiting for the holiday season or any random special occasions to try out this recipe, all I can say is that you’re missing out by not baking it today.

Have an event where people will be gathering soon? These are a good excuse (if you NEED an excuse!) for something ‘adult-sweet.’

This recipe is like so many others you will find here on Not Entirely Average – a cheater recipe for pineapple cupcakes with yellow cake mix. C’mon, if they don’t ask, DON’T TELL!

Preheat your oven to 350°F and place a wire rack on your counter. Assemble 24 cupcake liners into a cupcake pan. Caveat: this recipe makes 24 medium-sized cupcakes or 16 to 18 large cupcakes.

If you think you’d like to go large, fill each cupcake liner slightly more than 3/4 full. If you want to go for mediums, fill the liners only halfway. They’ll still bake up beautifully, I promise!

How to Make Vanilla Rum Cupcakes

In the bowl of a stand mixer on medium speed (or a large bowl if you prefer to use a handheld electric mixer), combine a box of yellow cake mix with three eggs, a third of a cup vegetable oil, and a bunch of crushed pineapple. Add some of the pineapple juice as well, a few of tablespoons anyway.

Scrape down the sides of the bowl with a rubber spatula before folding in some (toasted) shredded coconut and stirring well to combine. PRO TIP: if you like coconut and want to enhance the coconut flavor over and above what the sweetened shredded coconut will offer, consider adding a few drops of coconut extract.

Use a small ice cream scoop to evenly distribute the cupcake batter among the cupcake liners filling all 24 about half full or 16 to 18 liners slightly more than 3/4 full. Get all of that fabulous batter and scrape the bottom of the bowl!

Bake for 20 to 22 minutes (22 to 24 for larger cupcakes) or until a toothpick inserted into the centers comes out clean. I like to allow the cupcakes to cool in the pan for 3 to 5 minutes before removing.

How to Infuse Pineapple Vanilla Cupcakes with Rum

Once the cupcakes are popped out atop the wire cooling rack, use the same test toothpick to prick the tops with a dozen or so tiny holes each. Go in about halfway but be sure NOT to punch through the bottom of the cupcake liner.

In a shallow bowl, melt some unsalted butter in the microwave for a few seconds. Add 1/4 cup of rum (use a good rum with a contrasting flavor such as a spiced rum) to the melted butter and stir it well.

Use a pastry brush to brush the tops of each cupcake so the rum and butter mixture penetrates the tiny holes. You are looking for subtle rum flavor which will also moisten the warm cake.

Allow the vanilla rum cupcakes to cool completely while you assemble the boozy buttercream. If you’ve got leftover basting rum after hitting all of the cupcakes, continue to baste lightly as they cool.

How to Make Boozy Buttercream Frosting

In the clean and dry bowl of your stand mixer (or a medium bowl if using a hand mixer), add two sticks of unsalted butter (1 cup butter in total) that have been softened to room temperature. Add three cups of Confectioners’ sugar, pineapple juice (and tidbits if desired), and some vanilla extract and cream butter and the add-ins together.

You have choices when it comes to frosting the cupcakes. Both are correct and both, I think anyway, look equally as festive.

Use an offset spatula to pile on the buttercream and mound it as you apply it to each top, OR…load the buttercream directly into a piping bag fitted with at least a 1/2-inch star tip.

If you go the piping route, do heed the direction of the 1/2-inch star tip OR WIDER. It is possible and probable tidbits of pineapple snuck into your frosting whether intended or not.

The last snag you need to hit is a pineapple tidbit clogging your tip! I go out of my way to ensure tidbits of pineapple DO get into my frosting which is why I use the offset spatula method to swirl on that gorgeous buttercream!

Here’s where the fun begins. The sky is really the limit here, but these are some ideas I’ve used in the past!

Toast some shaved coconut or chopped macadamia nuts to sprinkle atop each little cake. Toasting brings out the nuttiness and the sugar in both coconut and macadamias, so you just can’t go wrong with either or both.

Macerate pineapple wedges or any remaining crushed pineapple for several hours in rum. Maceration is a fabulous tool for infusing alcohol into fruit and it’s entirely fabulous.

If macerating crushed pineapple, use a fork to lift and lightly drain the pulp from the rum before shimmying atop each cupcake. Wedges may be tucked neatly into a side of the boozy buttercream at an angle to secure them.

If you’re not sure what to do, do a few of each! Arrange all onto a pretty platter and let guests select the cupcake that screams their name! 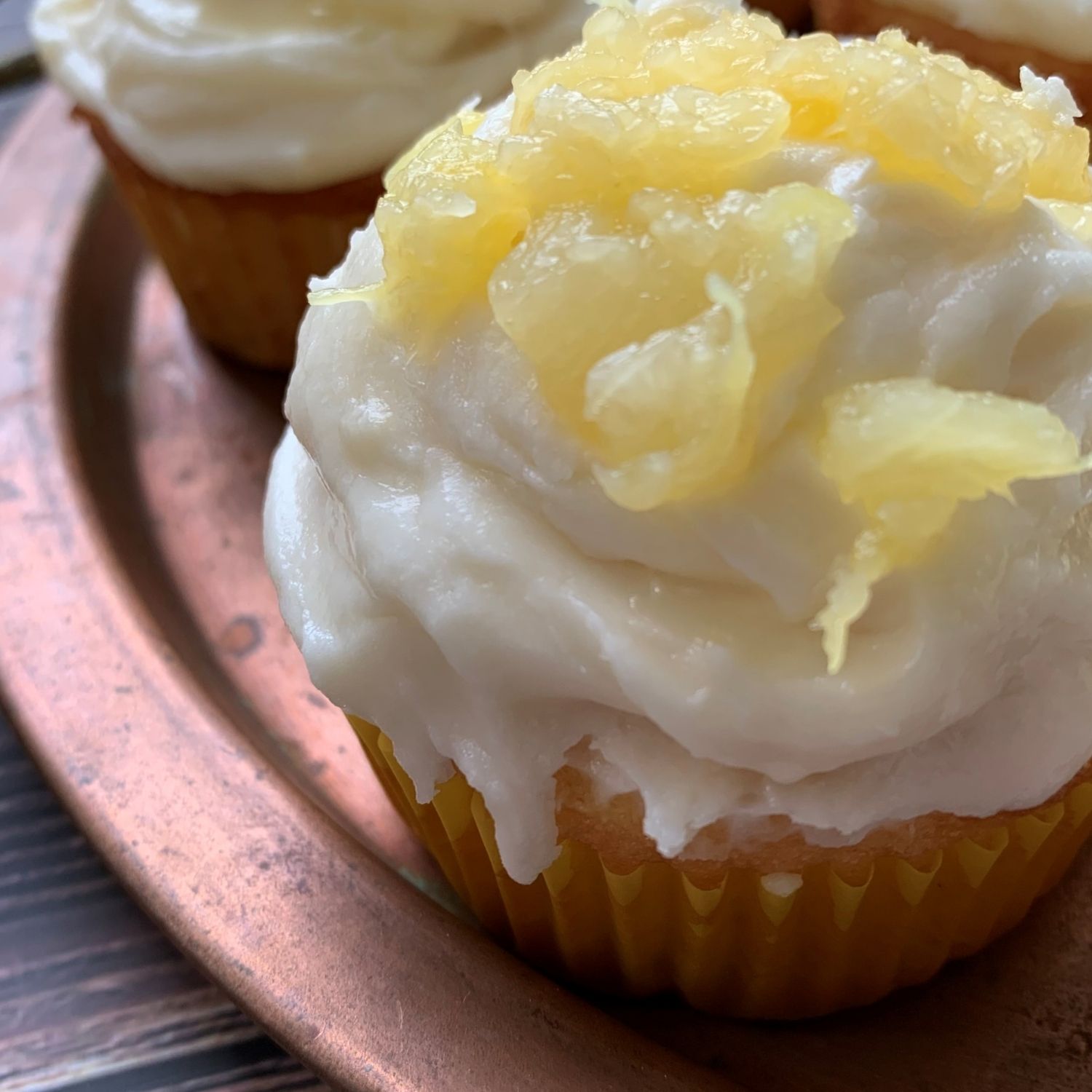 for the pineapple vanilla cupcakes

for the rum butter baste

for the boozy buttercream