Ukrainian Holubtsi or Stuffed Cabbage Rolls are a labor of love, and the epitome of an ultimate comfort food meal.
Jump to Recipe Print Recipe

Craving something home cooked? Ukrainian Holubtsi or Stuffed Cabbage Rolls are a labor of love, and the epitome of an ultimate comfort food meal.

Mom nailed it today. We hit the grocery yesterday so she could pick up a few cabbages. Her take on it - family coming in mid-week, and Ukrainian Holubtsi or Stuffed Cabbage Rolls would definitely feed a crowd. My take - she's missing her Mom, my Grandmother who we lost in 2016. Truth told, I am, too.

If you are now, or ever have been, intimidated by how daunting the task of preparing Holubtsi at home appears, fear not because the process is a whole lot easier than you might think.

I grew up eating this dish. It was served very frequently at my Grandmother's house. It was her mother's recipe, my Great Grandma, Rosa, who immigrated to the United States from Predni Poric, Galacia in 1909. She was 18 years old, the 4th daughter of seven, but she came to the New World all alone. She and my Great Grandfather are the only 'NEW ARRIVALS' to the US, as all other sides of my family were established here since the beginning...1607 in New Amsterdam for my earliest relation in fact. But, back to cabbage...

Cabbage Rolls are common to the cuisines of the Balkans, Central, Northern, and Eastern Europe, Turkey, Armenia, Azerbaijan, Georgia and Iran, as well as West Asia and Northern China.

In case you thought cabbage couldn't fill you up, think again. Gram served her delightfully sweet and savory bundles alongside mashed potatoes, bread and butter, pickled beets, sweet and sour onions, and a green salad with her homemade cider vinegar and sour cream dressing. Looking back, I can't believe how much my Grandmother would prepare for our family dinners. It takes me half a day to process one cabbage into Holubtsi let alone three, and she made it look easy, never complaining.

Most everyone I know refers to these as stuffed cabbage rolls. Others know them as halupki and others a golumpki. I have always known them as Holubtsi and could pronounce them when I was just a wee one. Great Grandma would repeat it until I could say it! What do you call them?

This dish ALWAYS made my Grandfather and my Dad go wild, and now my brother does his share of asking for my Mom to prepare Ukrainian Holubtsi or Stuffed Cabbage Rolls when he knows he will be down for a visit. It brings back childhood, reminds us of humble beginnings, the struggle during the Depression whether we lived through it or came along after, and teaches us not to waste. It is comfort. And it's a BEAUTIFUL dish.

Cabbage leaves, unlike lettuce leaves, are not easily detached from the head. They require 'softening of the cone,' the dense whitish stalk that travels up from the bottom of the bloom. Ripped or torn leaves will not work in this method, so it's worth spending the extra few minutes to remove the leaves correctly.

I woke by 7 this morning to the clanking of pots and pans. My Mom is 75 years young. It still surprises me when she musters the energy the way Gram used to, to wake early and core cabbages - yes, cabbages...plural. It's a lot of work, but as I said, I've just finished enjoying two dumplings, and she nailed it.

I grabbed my camera after throwing back a quick cup of coffee to document her method versus my own. I guess I've become a bit possessive and snooty where my own methods to recipes are concerned because I was expecting an under salted batch of barely seasoned dumplings, but I was wrong. Way wrong.

My Mom rolls her cabbages like cigars. I prefer mine folded and tucked the way in which I asked her to do them for the above video. I have seen others that appear to be nice, neat rolls with flat ends. Regardless of how you assemble, the completed cabbage rolls get placed seam-side down in the roasting pan during the bake. You needn't worry about them becoming unraveled, as you'll pack them tightly in.

She followed my Grandmothers recipe to the letter except for one ingredient we began adding a couple of decades ago, Heinz Chili Sauce. I am unsure if Gram ever knew it'd been added, but she never complained when it became my Mom's turn to serve Holubtsi to her.

Ukrainian Holubtsi or Stuffed Cabbage Rolls are filled with hearty combination of ground beef, rice, and chopped onion. The homemade sauce the Holubtsi are baked in is made up of whatever cabbage remains after the filling is used up, condensed tomato soup, canned tomatoes, and our sort-of-not-authentic-secret-ingredient, Heinz chili sauce. This dish could be described as sweet and savory. It goes very well with mashed potatoes, pickled beets, sweet and sour onions, and a loaf of hearty Challah or other egg bread.

Don't let me telling you that this is a lengthy process scare you, or the images of processing the cabbage above to make you think this is an all-day event - it's simply not. In fact, the cabbage processing step can go pretty quickly if you preferred to do only that, refrigerate, and roll the Holubtsi the next day. The idea here is make a mess of dumplings, bake them off, and either serve a crowd on the cheap, or freeze the additional batches for another night. 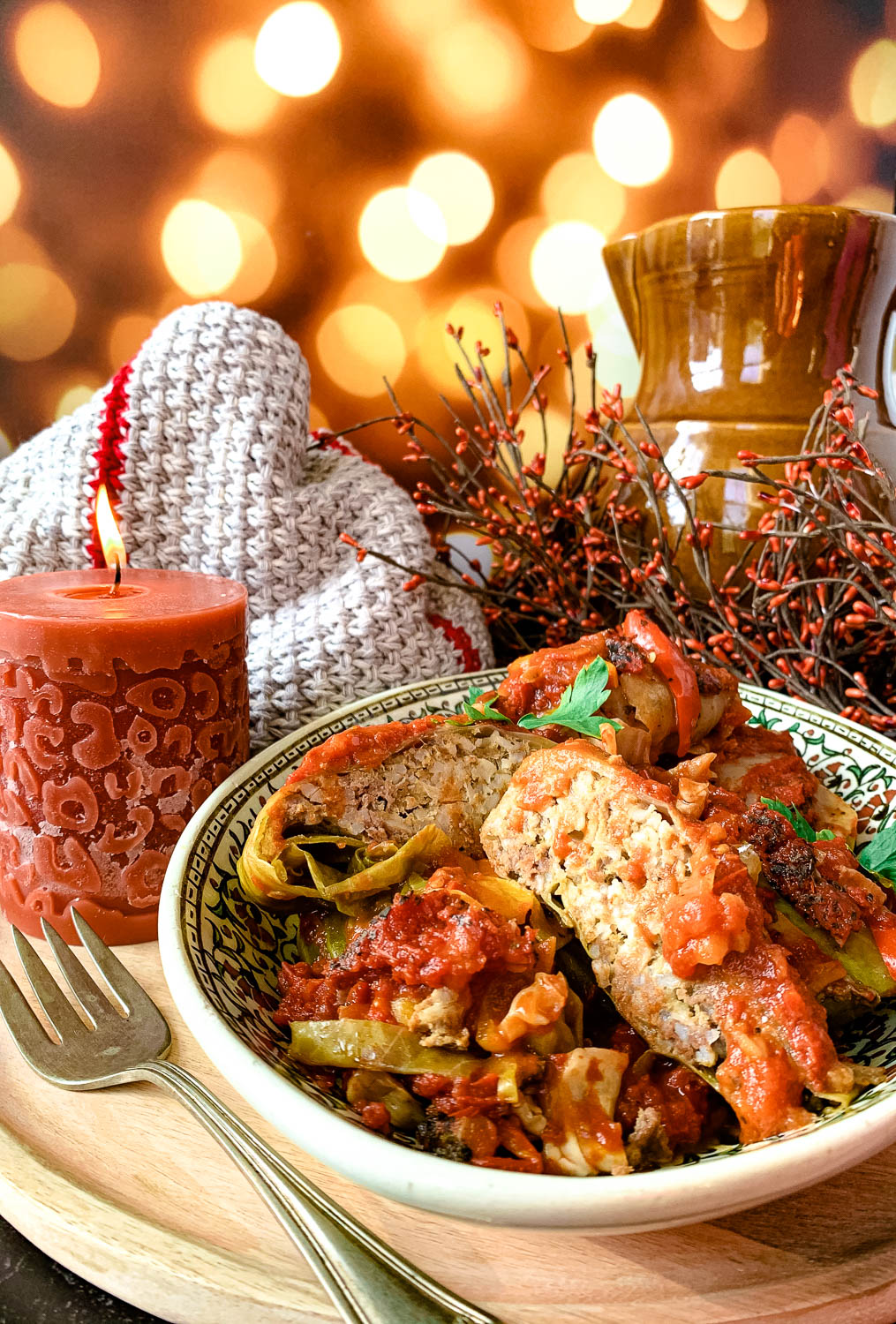 One head of cabbage yields approximately 24 Holubtsi, sometimes more if the cabbage is very large, sometimes less if the leaves are too small to roll. Select a large, tight cabbage when purchasing.