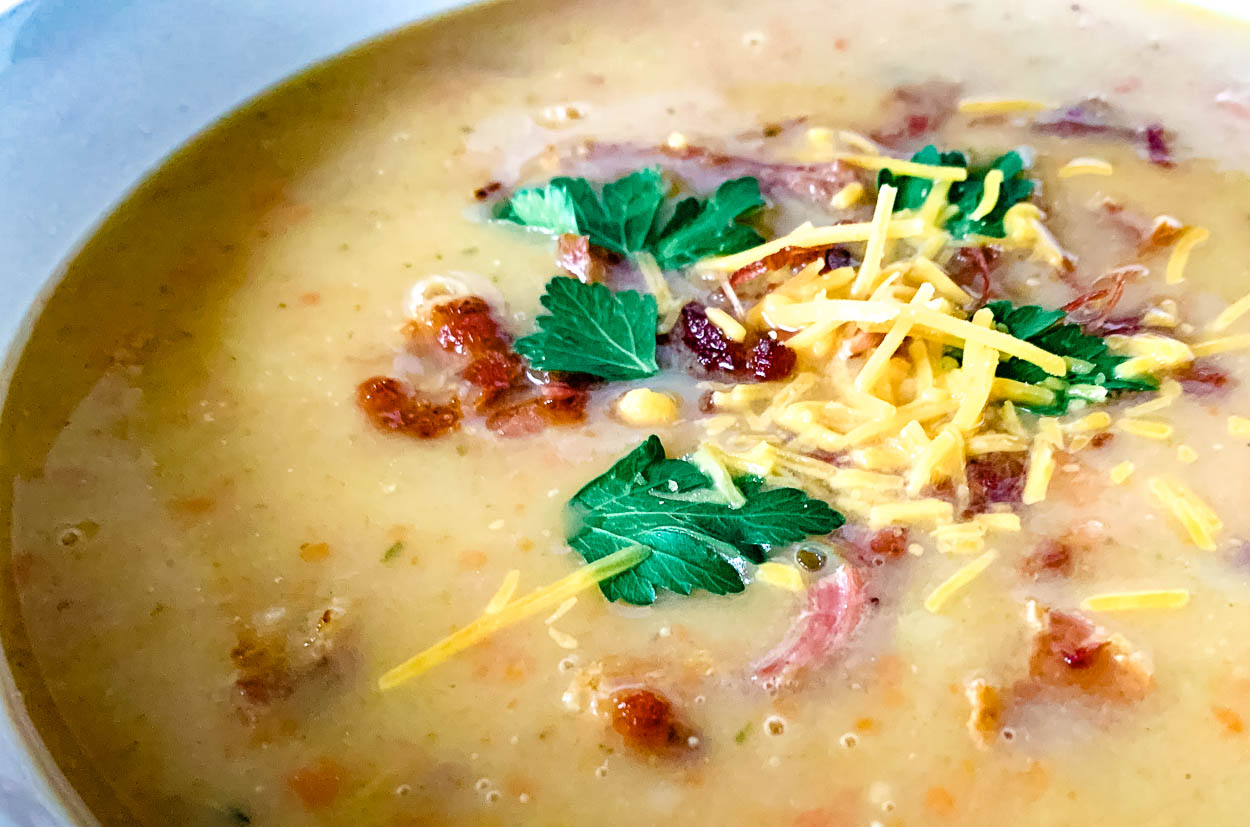 Try this elevated method for Creamy Plantation Potato and Ham Soup with the addition of smoky charred ham and the use of a homemade ham stock as the base. Wasn’t sure what you were going to do with that leftover ham bone after Christmas? I’ve got an idea…

This soup is prepared entirely with the stock that comes from a leftover ham bone. Get my recipe for using that leftover Christmas or Easter ham bone here,

How To Make Homemade Ham Stock

Is there anything better on a cold winter day than a big bowl of creamy potato soup?

Out of all the swanky parties I have had the pleasure of attending, the annual ball for the Charleston Horticultural Society at Middleton Place Gardens tops the list. The theme was Shakespeare’s A Midsummer Night’s Dream, and the planners of this particular party spared no expense. From this grand affair emerged a unique dish I learned from the Chef overseeing this party, one he shared with me many months later. This is a story about Creamy Plantation Potato and Ham Soup.

Halfway through the evening and beyond several hundred people gathered in the octagonal garden, a huge and softly lit simulated full moon was slowly hand-cranked from fair distance, reflecting off the flooded rice fields like a mirror. Partygoers stopped in their tracks to watch the lifelike spectacle in awe. There were grand tents with beautifully colored lights that faded into and out of the foreground and background, giving each tent a feeling of enormity.

An elevated Creamy Plantation Potato and Ham Soup is rich with the addition of smoky ham bits and the use of homemade ham stock as the base.

The fauna, from potted large trees and flowering palms to the smallest bouquets gracing each cocktail round, were exquisite. And, amidst the huge crowds of tuxedos and gowns mixed with the many dressed as Theseus and Hippolyta, was me. Jenny. So I was in standing, I arrived incognito dressed as a Wood-Sprite. I did a lot of people watching that evening, snickering a bit after the occasional stumble due to a stiletto heel sinking into the soft ground. During my enjoyment, I also had many cocktails and much to eat. I recall beginning with champagne, moving to passed desserts, and then onto the nosh with more substance.

For this recipe, I’m using Russet potatoes. They become soft and creamy during cooking, and absorb the smoky, complex flavor profile of the ham stock.

The food served to the gaggle of cultivator’s, propagator’s, and horticulturists on this occasion was nothing short of superb. Servers dressed impeccably in black and whites made the rounds with endless variations of small cocktail appetizers. Larger plates were available for assembly at a very long table fitted with several ice sculptures under which were platters of croquettes and mousses and roulades of duck and veal. That part of that particular tent was very busy. Jammed really. I was never able to make my way in to get a plate let alone sample the foods.

If you prefer firmer, chunkier potatoes that hold their shape during cooking, you can swap the Russets for the same amount of Yukon golds.

One food in particular that I managed to taste multiples of, was a delicious, smoky potato soup. It was largely free of solids and pureed until creamy. It came around on a sliver tray, passed, in shot glass-esque vessels. Each serving was garnished with fresh thyme and bits of smoked ham that had been charred like burnt ends. IT WAS PHENOMINAL.

I would have needed 20 or more to fill a bowl. After all, these were just small tastes. I certainly tasted way more than my share of this soup. By night’s end, the server whose tray I had grabbed from so many times told me that he “recognized me because of my ears.” I’d added pointy fairy ears to my fabulous Wood-Sprite ensemble!

Making good and efficient use of what you have and being creative with what is left over is considered being ‘kitchen keen.’

Fast forward to early summer and my good friend Richard coming to visit. Richard is from the UK, but had occasion to be in the States. We arranged for a weekend where he would drive out to Charleston, and I would show him the town. Of course, I took him to Middleton Place for a grand tour and lunch at their on site kitchen.

Very farm to table, very Colonial English, and I knew he’d love it. And toward the end of a fabulous meal, I asked a question of our waitress. I asked if anybody on staff was responsible for the party held some months back. I was shocked when Chef stepped out of the kitchen to chat me up.

We spoke about the evening. We talked about the sheer number of people and how many weeks of preparation the menus alone took for the committee to put together. Naturally, I was FULL of compliments. And then, I asked a question. I asked very specifically about a teeny tiny soup sampling I’d had that evening. And what I left Middleton Place with, aside from a full belly and fantastic tour, was a recipe. A recipe for Creamy Plantation Potato and Ham Soup.

Wonderful potatoes. The single most versatile ingredient next to corn in the history of food. The typical family dinner prepared in the home inevitably involves potatoes. I myself am head over heels crazy about a potato. Sweet potatoes, red potatoes, russet potatoes, you name it. I enjoy creamy potatoes, mashed potatoes, fried potatoes, and scalloped potatoes. And with the addition of some ham or chicken stock and a leftover ham bone, many a potato bean soup has been simmered.

Be sure to taste and adjust for salt several times during the preparation of this soup. A salty leftover ham bone does not ensure the ham stock will carry enough salt to season the potatoes.

The method for the soup recipe I was gifted was a little different. This potato soup recipe called for a base of ham stock and about 2 cups of leftover ham in addition to a myriad of garden vegetables and herbs. An immersion blender is used at the end to puree the solids, making for a beautifully creamy ham and potato soup.

If you are among the many who caught my previous post for How To Make Homemade Ham Stock, you will both appreciate this recipe, as well as want to try it I think. Thick and creamy ham and potato soup is a nourishing new year dish that is best left to a cold weekend day when you want something hot and delicious, but don’t really want to cook.

How Do You Make Creamy Plantation Potato and Ham Soup?

You will want to use a heavy bottomed stock pot for this ham potato soup. A slow cooker seems like it would be rational because we are going to simmer this low over time, but the slow cooker simply will not get up to the temperatures and brief boils we need to perform to achieve the consistency we are going for in this dish. And, unfortunately, an instant pot will take us too far, too fast. A heavy bottomed stock pot over medium heat for about an hour is the ticket.

If you do not have ham stock on hand, chicken broth may be substituted. Using chicken broth will diminish the complexity of the flavors. You will also lose that element of smoke unless your broth is homemade and from smoked chickens. The addition of bits of crackled ham in soup offers yet another layer of complexity. I rough chop those bits and fry them quickly over high heat in about a tablespoon of bacon fat. It’s a superior profile otherwise unachievable with other garnish or condiments. That, and soup with ham just rocks.

What Is The Best Creamy Ham And Potato Soup?

I do not tout this as a healthy ham and potato soup by any means, however, it’s really not terrible far off. This is a ham and potato soup with heavy cream, however the addition of that cream is merely 1/4 cup in a recipe that yields 6 to 8 hearty servings. And to be clear, this is not a ham bone and potato soup. This is a potato & ham soup which will strictly use ham stock as its base. The layers of flavor will be built on top of that base.

Did you know that it’s super easy to print out a version of a half recipe or even a double recipe on Not Entirely Average? Hover over the serving size (highlighted in blue, it says 8 on this recipe) and then slide the the white line to the left to make less or to the right to make more. This "calculator" allows you to play until you get the number of servings you want. Easy.