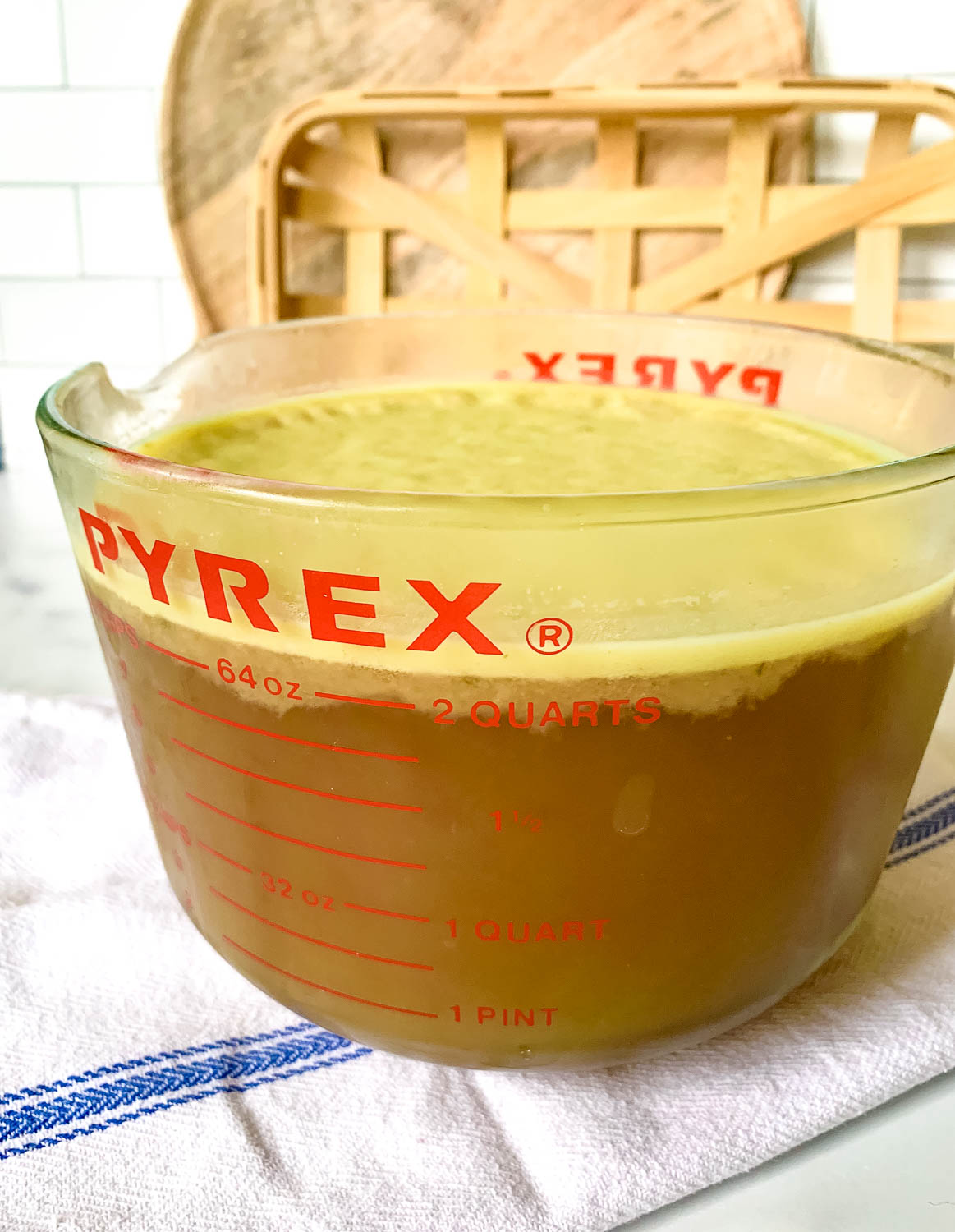 Use this Homemade Ham Stock to make

Want to be ‘kitchen keen’ and make full use of that rotisserie chicken?

How To Make Homemade Chicken Stock

Used to be, I would only know to make split pea or ham and bean soup using this leftover ham bone. But last Easter, I schooled myself. I learned from an Italian chef during an online course, how to make homemade ham stock. And oh the dishes and soups BEYOND bean and split pea I have made thus far with that rich, nutrient-dense bone broth. Homemade ham stock is largely a hands-off project that repays you over and over again.

This ham stock recipe is very much a hands-off project that will give back each time you reach for it over and above a store bought can of broth.

By way of this post, I hope to teach a method for how to make homemade ham stock, a method which will become the basis for many more recipe posts on Not Entirely Average. A couple of years back, and long about late December or January, I overhauled both of my outside freezers. It’s always a very daunting task, but here in Charleston, South Carolina, we get days like today that reach into the low 70s. The idea of sticking half my upper self into a cold freezer really is not all that as you can now probably see.

In October and November, and because I am cooking for Not Entirely Average, I tend to accumulate bunches of containers and vacuum sealed bags of trial-and-error dishes. Some of these recipes either made it to a post on NEA because they were awesome, or didn’t make it because they could not be photographed well. If they’re tasty and my family rated them delicious, we absolutely eat them.

The freezers yielded quite the bounty this time around. Enough where I needn’t have shopped for much more than the proverbial ‘bread and milk’ for all of January, February, and March. April we skimmed off what was still hanging around.

Homemade ham stock is used in southern cooking to flavor and elevate many dishes to include collard greens, braised cabbage, red beans and rice, black eyed peas, porridge, braised bratwursts and sausages, and to cook noodles and pastas in lieu of water.

Food is obviously something near and dear to my heart. It makes me happy when people enjoy the food I prepare. It also makes me happy when people have food. Enough food. Too many times this horrible year the news on the television made me sob, as so many American’s were in need of food. So many more that is, who never needed to ask for help before.

And with the coming new year comes promises and hope of better times to come. There are those, and always unfortunately will be those, who just need assistance based on age, health, mobility, etc. I know of two such houses a few miles from me.

Stock is a ‘do ahead’ kitchen project by as many as 3 days. Once finished, let cool. At this point, you can cover and chill it, or freeze it for up to 3 months.

After a Costco run, and a couple of their fabulous rotisserie chickens later, I fill a Christmas box for both of these homes. This year, in addition to those chickens, sweet potatoes, cans of green beans and corn, I tucked in quarts of my homemade ham stock. Rather than buying ham hocks or ham bones, I included the ham bone stock for easy preparation of collards, okra and ham soup, and a base for black-eyed peas. If you have no idea what the foods are that I have just referenced, you’d best not come southbound without looking a few of these up. After all, you have to eat, and these staples are what’s for dinner in Charleston.

There is no ham stock substitute that I am aware of that is as good as the ham broth or ham bone broth homemade. And as I mentioned earlier, there’s more ways to use this well seasoned broth than just for making soup. Some ham hock stock uses come to mind immediately, including collards, rice porridge, one-pot egg noodles with sausage, red rice and beans, braised cabbage, and even braised brats. Making stock from scraps that might have been thrown away feels like getting free food, plus the homemade stock is so much more flavorful than anything canned. Did I mention that your house smells great while the stock is cooking? Call me frugal, but be sure to also call me smart.

How Do You Make Homemade Ham Stock?

How to make ham stock is not a question I often get. I have had readers ask if there are any reasons to hang onto that ham bone after a holiday dinner. It’s my hope that this post will become the basis for many recipe posts to follow that will absolutely use broth from ham bone. There are no fancy ingredients and you needn’t whip out your slow cooker or pressure cooker for this. An easy ham broth recipe requires only a large stockpot. Bay leaves, as many cups water is it takes to sufficiently cover the bone, and the trilogy of onion, celery, and carrot help with the rest.

I also find about a tablespoon of whole black peppercorns to toss in. Bacon fat leftover from breakfast, crushed garlic cloves, and a bouquet garni help to layer the end product. A leek makes it even better if you’ve got one. The bag of frozen leeks from Trader Joe’s are fantastic for things like this. Making broth from ham bone(s) and freezing it both in ice cube trays as well as plastic containers makes thawing it for use a cinch. I find using the ham stock cubes which I freeze in ice trays extremely handy. They add depth to my beef and pork ragu. I also cook pasta salad noodles using half ham stock and half water.

The best way to ham up your dish is to first make a stock and use that stock to cook the rest of the dish.

Once your stock is finished simmering, after about 3 hours, allow your soup a 24 hour rest in the refrigerator. This is not a suggestion, rather a quasi requirement if you plan to either use immediately or freeze. The fat solids need the change to float and collect at the top of the stock. Chilling it allows it to become somewhat firm and easily spooned off. In the photos I have selected to show, you can clearly see that layer of fat capping the stock. Remove this before using or freezing. The broth itself will not be fluid, rather mildly gelatinous. This is bone broth. In its chilled state, this is the correct consistency. If you’ve gotten it to this stage, you’ve done it all correctly!

How To Make Homemade Ham Stock