It's an easy bread pudding recipe made with pumpkin puree, good bread, and a few other simple ingredients. 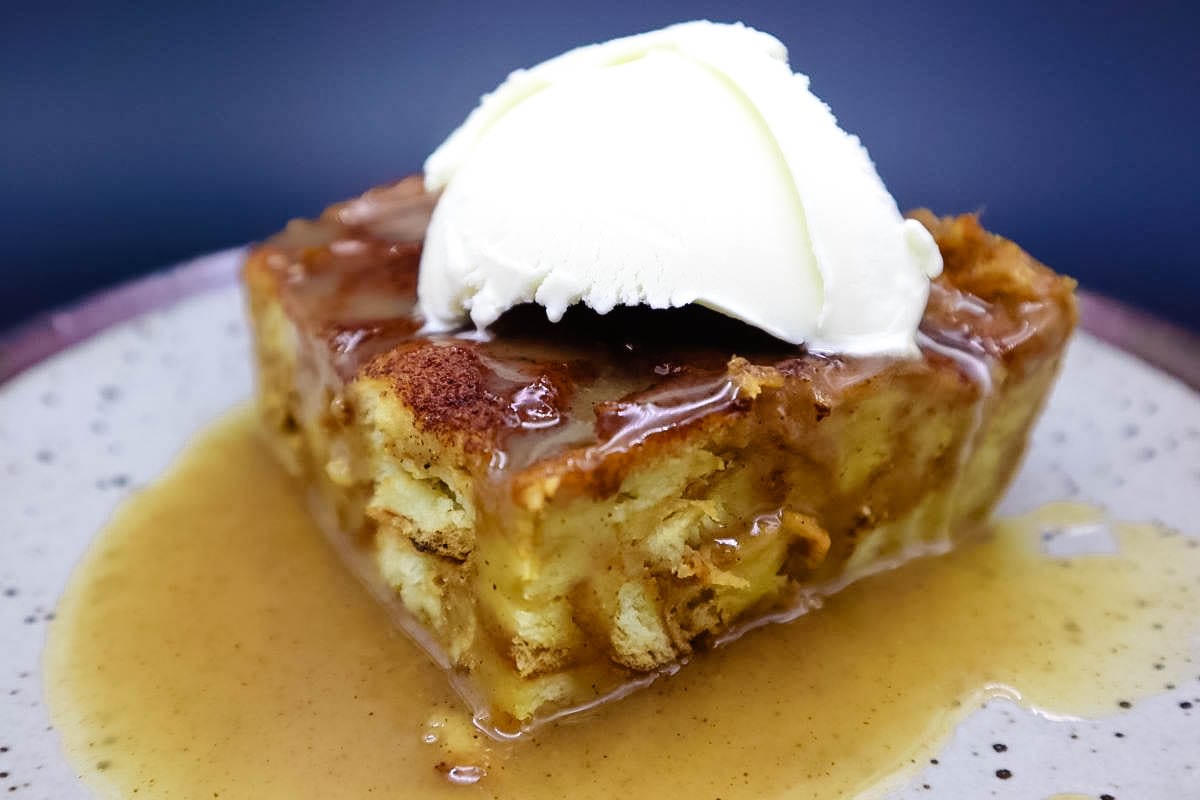 Pumpkin Pecan Bread Pudding is a great fall dessert.  I've made many variations of bread pudding over the years, but I stopped experimenting once I perfected this cinnamon custard version to which I have added pumpkin and pecans in time for Thanksgiving.   It's an easy bread pudding recipe made with pumpkin puree, good bread, and a few other simple ingredients.  The secret? Well trust me when I tell you that I baked my way through close to eleven different types of bread in this dessert just to be able to say that I narrowed it down to the loaf I personally recommend for use in this dish; Challah.

This dessert is a make ahead and bake later if you are busy juggling plans for a crowd. You needn't worry about it drying out before or during the bake either, as the pumpkin mixture bakes into a sweet, cinnamony custard keeping everything delicate, moist, and luscious. As if this dessert were not amazing enough on its own, Pumpkin Pecan Bread Pudding gets topped with a warm cinnamon sauce and a hearty scoop of vanilla bean ice cream when serving. Pumpkin Pecan Bread Pudding will likely be one of the best things you bake this fall. 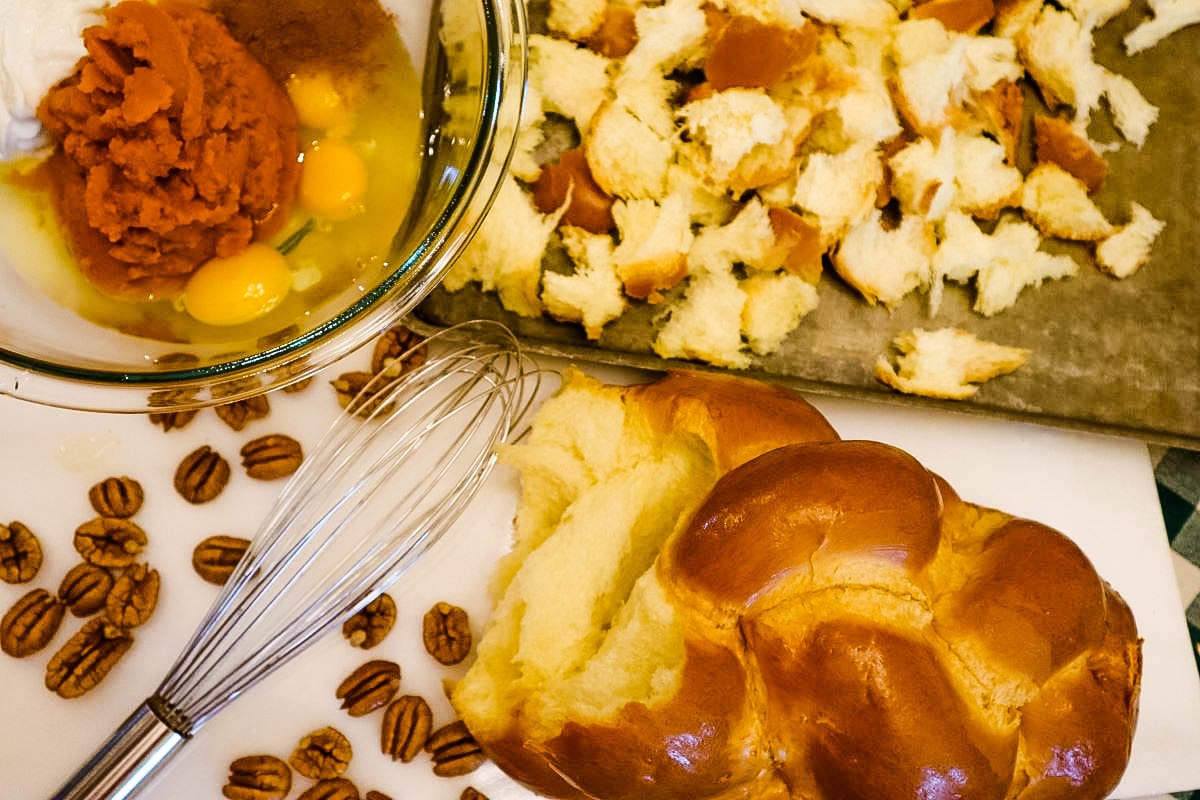 My own Grandmother always told me this is the best thing I make. I always worked it into the menu when she came over. It's a great feeling and a tremendous compliment.

One of the most popular recipes I have made for guests and family to my home over the years is my bread pudding. I’ve had so many people ask me to make the recipe and then tell me how much it reminds them of the bread pudding their mom or grandmother used to make. My own Grandmother always told me this is the best thing I make. I always worked it into the menu when she came over. It's a great feeling and a tremendous compliment.

Now that the weather has turned a chilly cheek, I wanted to change the recipe enough to scream 'pumpkin spice,' and there is no better way to scream pumpkin spice than to add pumpkin. Pumpkin, and pumpkin's besties, some good vanilla, a dash of pumpkin pie spice, and some cinnamon, that is. I am a big fan of pumpkin, especially pumpkin pie. Pumpkin Pecan Bread Pudding can best be described as ribbons of pumpkin pie swirled around a warm French toast. And while I might be hungry for a slice of pumpkin pie, I don’t always embrace the work that goes into making a pie crust, so a hearty bread pudding can easily take the place of pie and give me the same satisfaction...it's even better if I'm honest. Challah is by far my top choice because it's tender with a firm crust and is available year-round.

I mentioned I baked my way through eleven types of bread before finding my best ingredient for this dessert. Challah is by far my top choice because it's tender with a firm crust and is available year-round. However, an alternate to Challah is Panettone. I would be remiss if I did not mention it because before the Holidays, Panettone is really easy to find. Seriously, it's everywhere.

There are two versions from Costco and one from Amazon that offer a spin to the ingredients and method I am highlighting herein. It's because Panettone loaves are studded with dried fruits or nut meats like raisins or chestnuts, swirled with cinnamon, or perhaps have bits of pumpkin or candied orange baked right into them. If you have access to Panettone, I encourage you to use it. Just keep in mind that this is a pumpkin recipe, so watch what flavor Panettone you use.

If, however you are making this pudding and cannot find Panettone, Challah is by far more widely available in markets year-round. If you are using Challah and the loaf is fresh, you will need to mimic 'day-old' by cutting or tearing the bread into 1- or 2-inch cubes and drying the cubes in a low oven for about 10 minutes to dry it out slightly.

What You'll Need For the Cinnamon Syrup

What You'll Need For the Bread Pudding

To Make the Cinnamon Syrup

Combine 1 cup of water and brown sugar in a heavy medium saucepan. Bring to a boil over high heat, stirring until the sugar completely dissolves. Boil gently so as not to burn until the syrup reduces to 1 cup, about 10 minutes. Remove from the heat and whisk in the cream and cinnamon. Keep the syrup warm. (The syrup can be made 1 day ahead. Cool, then cover and refrigerate. Re-warm before serving.)

To Assemble the Bread Pudding

Butter a 13 by 9 by 2-inch baking dish well. Arrange the bread cubes in prepared dish. If using fresh Challah bread, spread out on cookie sheet and allow to dry out slightly for 10 minutes at 275 degrees. If using Panettone, omit this step.

In a large bowl, whisk the eggs, cream, milk, vanilla, pumpkin puree, pumpkin pie spice, chopped pecans, raisins (if using), and sugar to blend. Pour the custard over the bread cubes and press the bread cubes gently to submerge. Let stand for 30 minutes, occasionally pressing the bread cubes into the custard mixture. (Can be prepared ahead. Simply cover with foil and refrigerate.) Preheat the oven to 350 degrees F.

Bake until the pudding puffs and is set in the center, about 45 to 55 minutes depending on your oven. My pudding went an hour and 5 minutes, so test your center - center of pudding should spring back slightly to the touch. Cool slightly before spooning the bread pudding into bowls. Drizzle with the warm cinnamon syrup and serve with a scoop of vanilla bean ice cream and additional chopped, toasted pecans if desired. 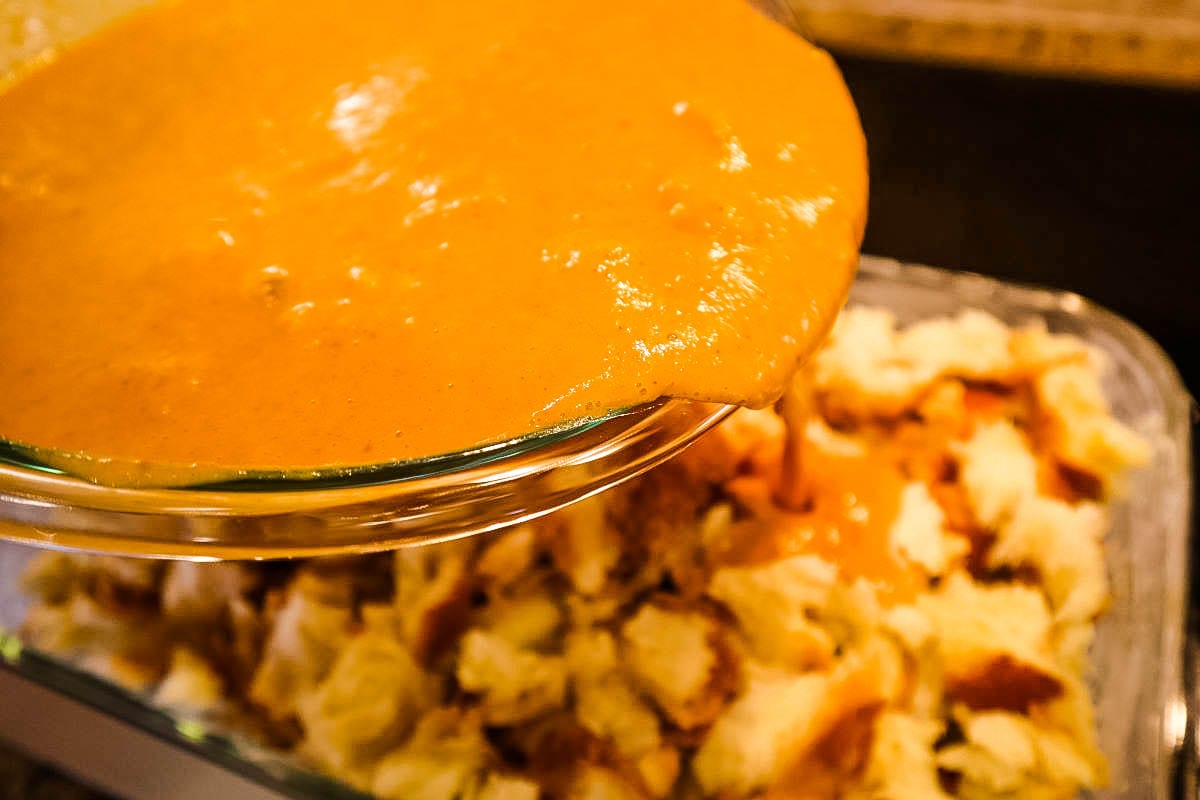 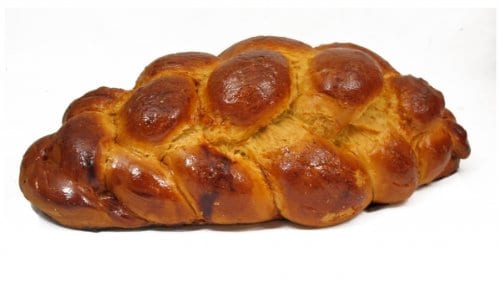