Baking up these snappy and guest-worthy Southern Pecan Cheddar Wafers will make YOU as suddenly southern as they made me!
Jump to Recipe Print Recipe

Baking up these snappy and guest-worthy Southern Pecan Cheddar Wafers will make YOU as suddenly southern as they made me!

In addition to Pecan Tassies and Southern Tea Cakes making up my Christmas cookies gifting tins, I include Southern Pecan Cheddar Wafers. If you've ever heard of or eaten a cheese straw, the taste is similar, but with a healthy crispy CRUNCH. Trust me, learning how to put these snappy cheese wafers up will make YOU as suddenly southern as they made me!

So, you've heard of ice box cookies, right? The kind you mix and shape into a square, a rectangle, or a log and slice and bake? They're fantastic for keeping on hand during the holidays for when folks drop in, you need a quick homemade gift, or a sweet nibble for after lunch with hot tea. Southern Pecan Cheddar Wafers are pretty much the same idea, but…WITH CHEESE! Yes, Lord knows some lady way back in the day came up with these and the rest of us are better off because of her! Think sharp cheddar cheese crackers rendezvousing with sweet pecan halves, crispy rice cereal, and a smidge of cayenne pepper. They get all friendly and lovey as dough on a baking sheet and before you know it, BOOM! Cheddar pecan wafers are that recipe that's minutes versus hours.

These wafers are pretty topped with a single pecan half, and definitely authentic 'below the Mason Dixon Line' delish.

I'd been living in Charleston, South Carolina for at least a year before discovering these delicious little cheddar cheese wafers. I want to say that they arrived in a gourmet basket from one of the stalls at the Market downtown. Melt-in-your-mouth thin cheese wafers with pecans, and a bottle of dry Chablis. Those are the two items that stand out in my mind as favorites from that gift basket. I was definitely still very much a Yank at that point, unaware of (refusing to accept) the culture change that was surrounding me.

I popped open that Chablis and began sampling the individual bags of goodies. Benne wafers, old fashioned Divinity candies, praline pecans, and these very pretty cheese cookies with pecans. Before too long, the Chablis was basically gone and I'd taste-tested everything. And along with the wine, those bite-sized cheese pennies with pecans were absolute new favorites. I was quickly learning that while I missed my New York restaurant scene, Southern fare, whether a dish or a simple snack, was going to give the 'North in me' a run for its money…

Still the BEST deal for the price, our friends at USA Pans offer the full sheet pan with cooling rack set. I own this and the quality is phenomenal. PERFECTLY fitted FLAT parchment sheets will save you much stress as opposed to the rolls...kitchen necessaries, click images for pricing.

It wouldn't be until more recently that I decided to try my hand at cheese straws. Upon flipping the television dial to Food Network, did I catch the tail end of a recipe for cheese wafers Paula Deen was assembling. I watched her stir together a handful of ingredients including some butter, all purpose flour, shredded sharp cheddar, and pepper. The dough absolutely became to stiff and she abandoned the big wooden spoon she'd been using, rolled her sleeves up, and went right into that big old bowl with both hands. As she mixed and kneaded the dough, she lovingly smiled as she referenced "my Grandmother's cheese wafers."

Following that bitty tail of a recipe clip, I tried cheese wafers from Southern Living Magazine, Martha Stewart's cheese cookies recipe, and even a gluten free cheese straw recipe. And one morning, while chatting up a gal I knew from one of the local kitchen stores, I mentioned having experimented with all sorts of cheese wafers recipes as well as a cheese straw with pecans recipe. She looked at me puzzlingly for just a second, registering that I was still a foreigner so to speak, and scribbled roughly her method for southern cheese wafers. To my glee, this was a recipe for cheese cookies with Rice Krispies!

The niftiest gizmo you never knew you needed, the bench scraper. This is made of durable stainless steel and it's dishwasher safe and sanitary. This product is a result of over one hundred years and four generations of innovation and development. A true kitchen necessary, click image for pricing.

Sometimes, when things are just weird enough, they are positively delicious. Such is this method. It's based on my friends dad's fondness for pecan appetizers. Apparently, he grew up in Georgia on a pecan plantation and just cannot get enough of pecans. These rice krispie cheese wafers are a spinoff of his quest for appetizers with pecans. I don't think he 'invented' this recipe, but he sure made them often enough to know the measures by heart. It is similar to the Martha wafer in that it's assembled, kneaded, and rolled into a log to cut like you'd cut an ice box cookie. But these have one additional ingredient that sets them apart. Crisped rice cereal. So, you know…I had to make them.

Cheese wafers with Rice Krispies are an unexpected crunch amidst a sweet and zesty pecan cheese. This cheese wafer recipe is stiff and tends to be dry…until the bake. The combination of unsalted butter and super sharp cheddar give them a perfectly crumbly crumb. I have run with this method for about six years now, omitting the chopped pecans and settling for a pecan half atop each wafer. They are pretty this way, and definitely authentic 'below the Mason Dixon Line' delish.

Biscuit and cookie cutters are entirely useful kitchen tools whether for the biscuit, the cookie, or even doughnuts and monkey bread. Buy a single or purchase a set. Both the 1 1/2-inch and the 2-inch cutters work fabulously for this cheddar wafer recipe. Kitchen necessaries, click images for pricing.

Here's what I know from running this method with these measured ingredients so many times. Don't make my mistakes, rather follow my tips herein for perfect Southern Pecan Cheddar Wafers every single time. MUST PREHEAT OVEN. No getting around this. The oven must be to temp BEFORE sliding the parchment paper-lined cookie sheets inside. And, 350 degrees F is the absolute mark. This is a super short bake, so every degree counts.

You will get a bit of a rise and spreading from these during the bake. Make sure to space them an inch apart on the cookie sheets. Allow them to cool on wire racks. You need to do this because in order to maintain that crunch, air must circulate beneath these little rice krispie cheese cookies for them to cool evenly. And any crisped rice cereal will work, so do not spend extra dollars on a name brand that is essentially the same as the store label brand.

Todays rolling pins make measuring the thickness of rolled dough a cinch. If you are a purist and aren't keen on the plastic guides, all wooden pins with sturdy wooden guides are also available. Kitchen necessaries, click images for pricing. 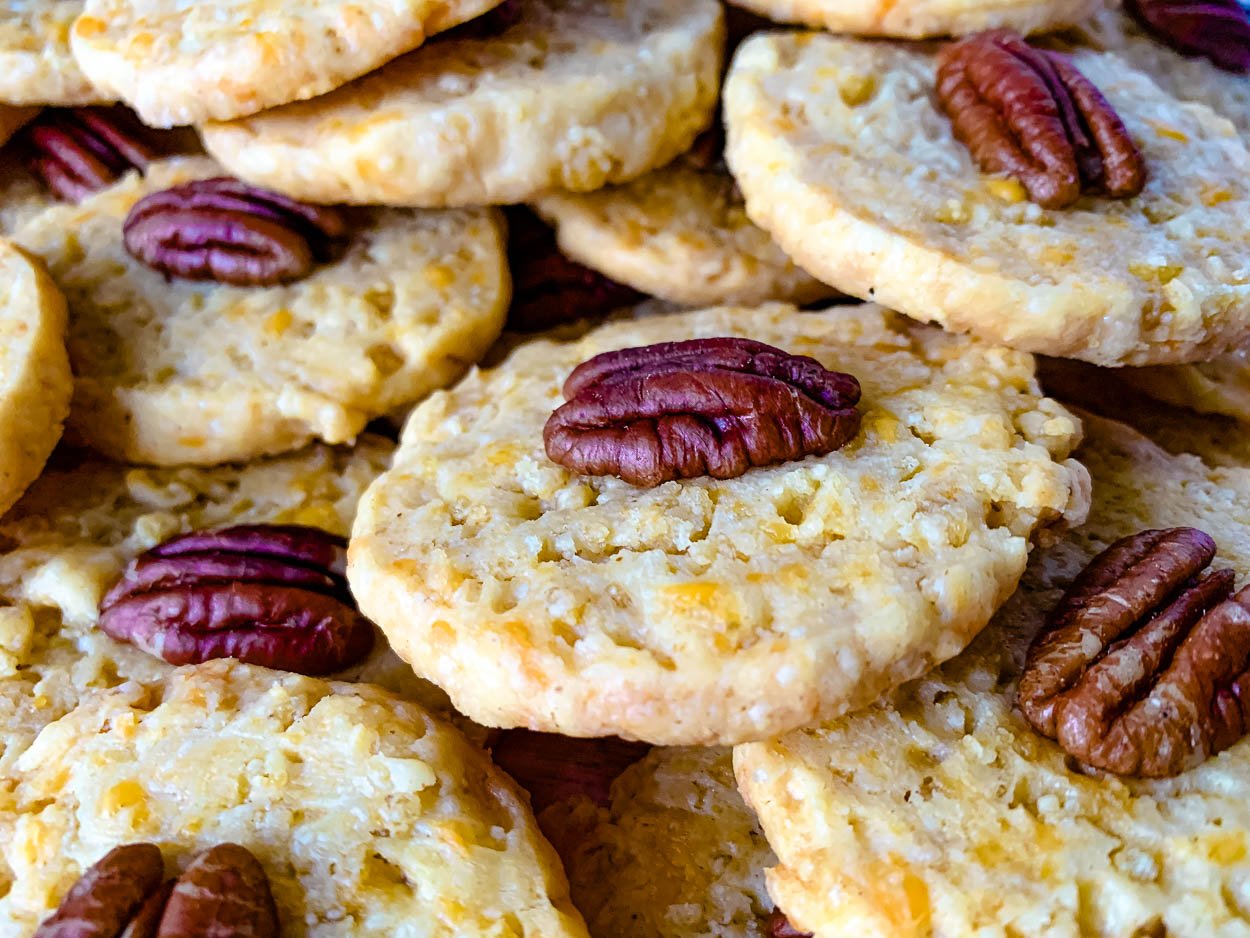 To Make Ahead:  Dough can be made 2 days in advance.  Alternate Method For Cutting Wafers: This suggestion comes from Amy, a reader of Not Entirely Average in North Carolina! Alternatively, divide dough in half and shape into a ball. Wrap and refrigerate at least one hour. Remove wrap and roll out as you would cookie dough to 1/4-inch thickness. Use a round 2-inch biscuit cutter to cut the wafers. Thanks Amy! Freeze option:  Freeze wrapped logs in an airtight container. To use, unwrap frozen logs and cut into slices. Bake as directed.