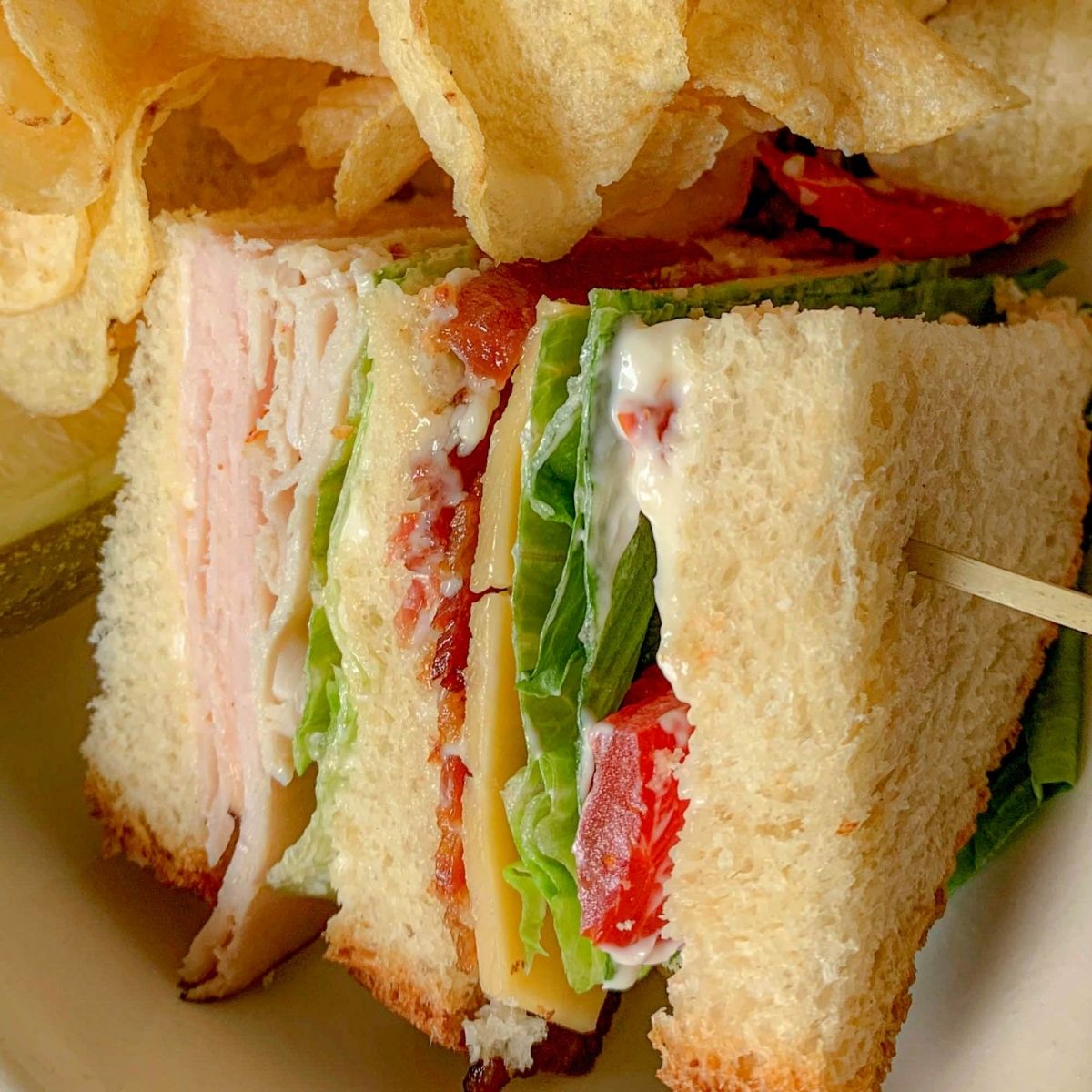 The Union Club is the fifth oldest private club in America, and the venue to invent the New York Club Sandwich recipe back in 1889.

The sandwich of sandwiches, a New York Club Sandwich is that iconic dagwood or triple decker sandwich that graces the menus of diners across America.

The best club sandwich recipe boasts the framework of a BLT, but adds various types of cheese, deli chicken or turkey, sometimes ham, and an additional layer of sliced bread smack dab in the middle.

To assemble a club is to assemble a little bit of something we are all familiar with; comfort food.

If you’ve no time to search for recipes that’ll maintain your standing as most clever parent in the kitchen, just pull a few of these off and arrange on a platter with some chips and a quality Jewish half sour pickle.

Do You Have The Ingredients For A New York Club Sandwich Recipe? Check The List!

Company was coming and I’d been on a two-week cooking streak. Needless to say, I was tapped out of enthusiasm for food. Yeah, this commonly happens as a food blogger.

There are those times that despite my focus on learning all I can learn about Southern cooking, I have to reach back into my “big bag of practicality” and channel the simple foods I was raised enjoying.

Little sandwiches are popular finger foods for casual parties here in the south. A mini sandwich can be anything from a slider to a savory biscuit with chipped country ham or sausage studded throughout.

These tiny works of art are legit delish, however do require a bit of prep work if making from scratch. For me, rather than baking a batch of biscuits to then dress, I can create four handhelds with the assembly of slices of toast and thin slices of meat and cheese for a single sandwich. And my spend-out is quite a bit less at that…

What’s In A Club Sandwich?

The best club sandwich in the world, the ultimate club sandwich, could be enjoyed at just about every Greek diner in the state of New Jersey.

Three toast slices, perfectly square mind you, 3 or 4 slices of bacon cooked crisp, lettuce, tomato slices, and layers of ham or turkey, all glued together magically with a dollop of mayo and cocktail sticks, one for each perfect droolworthy wedge…

Classic club sandwich ingredients are said to have been minimal, consisting of a mere two slices of bread, sliced cooked chicken breast fillet, tomato, and mayonnaise.

This classic sandwich recipe has evolved quite a lot in the past 100+ years, club sandwich variations popping up with everything from cooked duck breast to beef tongue.

How Do You Make A Good Club Sandwich?

For me, the basis of a really good club sandwich starts with the bread. To be traditional is to use slices of white Pullman loaf.

See my recipe for a Pullman loaf of Homemade Buttermilk Bread, and fabulous for using in this New York Club Sandwich recipe.

A Pullman loaf is baked in a special pan known as a Pullman pan, which has a sliding lid that covers the dough while baking. This lid traps the dough inside in order to create the perfectly square slice.

Also, in keeping with tradition, the bread is typically not toasted, however I find I enjoy my bread slightly toasted. Maybe for only 45 seconds to 1 minute. Personal preference, toast or don’t – whatever YOUR eaters will eat.

How To Layer A New York Club Sandwich?

It All Begins With the Bread

Ready to layer? This sandwich’s layers are made easier to assemble if everything is laid out in advance. That means all component parts ready to go.

Add olive oil to a small bowl. Using a pastry brush, lightly brush all of the bread on one side with the oil.

Toast bread slices for about a minute under your oven’s broiler. Flip at 30 seconds to toast the side of each bread slice. Then arrange all of the bread on a cutting board (oiled side up), being mindful that each dagwood will have three slices.

If you prefer a double-decker club, you may omit the third/middle bread slice. Have your cocktail picks at the ready and a long blade serrated knife.

Sandwich classics always get fancy cocktail or frill picks. If using a long toothpick, look for a length of at least 4 to 6-inches.

Prep the iceberg lettuce by making two neat stacks of leaves for EACH sandwich. Each lettuce stack needn’t have more than three or four leaves at most.

If your cooked bacon slices are particularly long, take kitchen shears and cut them in half for easier stacking.

Begin by applying a layer of mayonnaise to one side (the oiled side) of every piece of bread and give a good grind of black pepper over the lot. Unless you want a toppling tower plan to use heavy mayo and frill picks or cocktail picks to keep everything together.

I start from “the bottom up.” On top of the first bread slice arrange a layer of turkey or chicken breast. Turkey is popular, but in keeping with the Union Club’s original 1889 version, I generally go chicken. Your choice!

Secure the layers tightly with those cocktail picks by placing one in the center of each quadrant. Then cut into triangular pieces in a diamond-like pattern, corner to corner, and repeat. Four mini sandwiches in only a handful of minutes.

Check out some of the tools I like. All products featured on Not Entirely Average are independently selected by yours truly…click any image for details and pricing.

Make Ahead assemble sandwiches in full up to 4 hours in advance. Do not cut. Wrap tightly in plastic film or kitchen paper/parchment and refrigerate. When ready to serve, unwrap the sandwiches, secure cocktail picks in the center of each triangular quadrant, and cut into triangles. Note When Making Ahead: assemble the sandwiches according to the layering instructions EXCEPT, reverse the bacon, cheese, lettuce and tomato in the final step to bacon, then tomato, then lettuce, then cheese. This way, once the sandwiches are wrapped and refrigerated, the tomatoes will not make the bread or the cheese soggy.

As I mentioned above, variations to the iconic club sandwich are everywhere. From duck breast to beef tongue, if you can imagine it, it’s probably been done.

My recipe for club sandwich variations is first and foremost, purchasing the freshest deli meat I can get my hands on. In addition to classic chicken, I enjoy rare roast beef, peppered turkey, tavern ham, and also chicken salad. A corned beef sandwich and a pastrami sandwich are very traditional New York deli sandwiches, so naturally make awesome clubs!

You needn’t use sliced Pullman loaf to get a good tasting club either. A particularly pretty slice of bread is marbled rye with pumpernickel. It is a bit trickier to cut, yielding usually only three sandwich wedges.

Since cheese was not an original ingredient, there are liberties here. Swiss seems to be the most common deli cheese. I find Gouda very enjoyable, too. Again, it comes down to what YOUR eaters will eat.

Arrange avocado slices in the layers for a California Club if desired.

Want to really change this sammy up a bit? Layer in fried green tomato slices in lieu of the fresh tomato slices. Also, think ‘special sandwich creams’ and whip up this quick recipe for Mustamaise which is a killer substitute for mayo on any sandwich!

How Long Do Club Sandwiches Take To Make?

When I assemble large numbers of these for parties, say 20 sandwiches (80 wedges), I reserve about 45 minutes to get the job done.

If assembling a single sandwich, minus any toasting I may or may not do, about 10 minutes. The guides for these really come down to what will go on them and if bunches of sandwiches are required.

How Far Ahead Can I Assemble Club Sandwiches Before Serving?

I love this sandwich because it can be assembled ahead of time and refrigerated wrapped tightly in plastic film or kitchen paper. Simply assemble the sandwiches according to the layering instructions EXCEPT, reverse the cheese, lettuce and tomato in the final step to tomato, lettuce, cheese. Do not cut.

Instead, forgo the cocktail picks and wrap each sandwich whole in plastic film or kitchen paper/parchment. Refrigerate up to 4 hours. Just before serving, unwrap the sandwiches, secure cocktail picks in the center of each quadrant, and cut into triangles.

Why the big switch if making ahead? If you do not want soggy cheese or soggy bread, those tomatoes have to be reverse ordered.

What Is The Origin Of The Club Sandwich?

There are a couple of locations, both in New York, that during the late 19th century, claimed to be the first to assemble the iconic first club sandwich. Oh yes, this is all a United States invention, folks. It’s all us. In 1894, Richard Canfield ‘s Saratoga Club House in upstate Saratoga Springs, New York was said to have created the sandwich specially for his famed new Canfield Casino gambling club.

But additional sources are able to cite the earliest known reference to the clubhouse sandwich in an article that appeared in The Evening World (published in New York City from 1887 to 1931), on November 18, 1889 entitled “Have You Tried A Union Club Sandwich Yet?” This title referenced the well-known Union Club of New York City, a private club with a chef purported to have engineered the gastronomic masterpiece we know today.